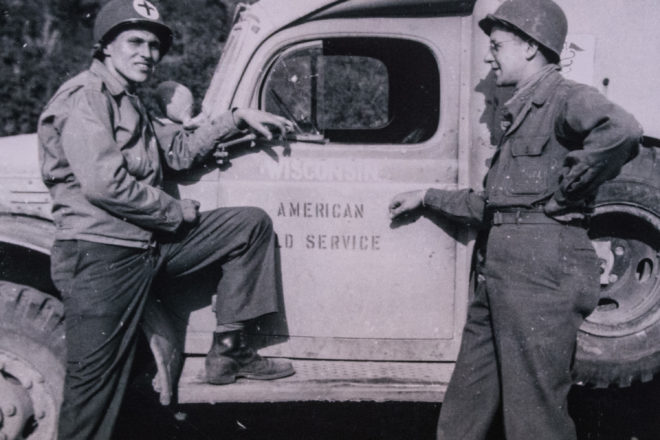 A collection of photos from “Working Warriors: Life Beyond Combat,” a traveling exhibit hosted by the Sister Bay Historical Society this month.

“The place where the old buildings are” had a few visitors just show up, and they’ve got stories to tell. For the month of August, the traveling exhibit Working Warriors: Life Beyond Combat presents life in foreign wars for those service men and women from Wisconsin who weren’t actively involved in combat, while stories of Sister Bay’s own during periods of crisis link the exhibit to the heritage of the village.

The exhibit, in the old Koessl barn, features 16 photo panels portraying stories of Wisconsin veterans as they went about their tasks behind the frontlines as well as accounts of Sister Bay residents during both World Wars.

Roughly 75 percent of work in the U.S. military today is considered non-combat. Testimonials in the exhibit tell that up to 10 non-combat personnel would support every soldier on the frontlines.

For the past few weeks, another traveling exhibit has been presented in tandem with the panels: a trunk containing all the gear given to a soldier on their way to the European theater of World War II. Visitors have had the opportunity to try on fatigues, don ammo belts, and flip through army-issue novels.

“Our overall goal is to show how Sister Bay relates to the nation and to the region around us and how this is all part of us too,” said Susan Armour, assistant curator at Corner of the Past. “This isn’t about some obscure thing that happened over there. This happened right here.” 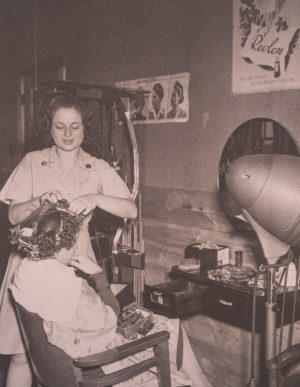 Stories of local heroes, which the historical society has presented alongside the panels on loan from the Wisconsin Humanities Council, are the linchpin for the entire exhibit. The stories reveal that life at home changed across the nation, even in a little village in northeast Wisconsin. People who felt strongly about their home and their neighbors stepped up to work just as hard as those who went to war to protect them.

Edwin Casperson, who saw dead World War I soldiers being transported to the cemetery in hay wagons, bought a hearse, got a mortician’s license, and offered his services for free. He later stepped down from his position as caretaker of Chambers Island to start Casperson Funeral Home with his wife in 1921, which is still family-owned and operated today.

Thomas and Donabelle Nelson Pritchett both found ways to serve their country during World War II. While Tom was away at war, Donabelle, a Sister Bay native, wished to offer her services as well. She shipped off to Seattle to become a “Rosie the Riveter,” the iconic WWII emblem of female effort, only to have her skills as a photographer put to use at Boeing, cataloguing parts and supplies. After the war, Tom and Dona returned to their family in Door County.

These and many more stories are shared here, offering a glimpse into the world of the folks that kept the peninsula running during these times of crisis. More often than not, those glimpses portray a people who were deeply patriotic and cared deeply for one another.

“They cared about the important things,” said Roberta Kutlik, head curator at the museum. “Raising a family. Their church. Their school. Those were the important things to them… [And the men who went to war] were so proud of what they did, but they were also proud to come back to Door County and keep working hard for their families and their community.”

The exhibits at Corner of the Past have been steadily growing the past two decades as the Sister Bay Historical Society added buildings to the property. The more buildings they’ve acquired, the more space they’ve had to exhibit their growing collection of artifacts, and in turn the more opportunity the historical society has to tell these stories of Sister Bay’s heroes and how they fit into the world at large.

Working Warriors: Life Beyond Combat will be at Corner of the Past Museum in Sister Bay until Aug. 26. Admission is $5 per person; children 12 and under are granted free admission. Stop by the Old Anderson Museum by the parking lot to sign in.