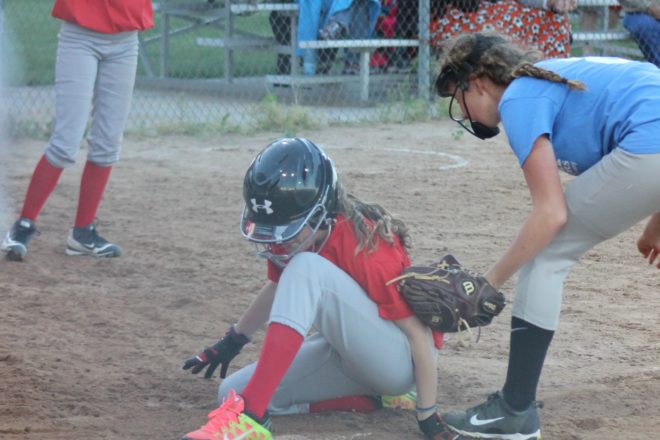 Sturgeon Bay’s Little League Softball has grown to include 200 participants on 17 teams. Submitted.

Sturgeon Bay’s Little League Softball is underway for the 2017 season. Approximately 200 participants on17 teams are competing within their respective leagues this summer. Girls ranging from six-year-olds through high school ages from across the county take to the diamonds to play the game.

Leading the organization is league board member and coach Ben Rikkola, who also has three daughters participating. He sees the value of athletics and the importance of passing along knowledge to those at a young age.

“I never planned on being in charge of Little League Softball, but then again, I never planned on having three daughters playing in three different softball leagues on the same night,” Rikkola said. “Whatever you’re good at, you should pass that on to someone young before it’s too late. For me, I have a lot of experience in athletics, so one thing I like to pass on is all the life lessons found in sports.”

The local Little League Softball program consists of four divisions that begins with the “Farm League” for participants ages six to eight. The goal of this league is to introduce young girls to the sport of softball. Coaches pitch and implement a no-strike out policy that allows participants to practice their skills and achieve success.

The “Minor League” is comprised of girls between the ages of nine and 10. The level of competition increases and players further develop their understanding of the game while continuing to focus on the fundamentals of softball. While players begin to pitch at this level, modified rules allow for coaches to pitch after four balls are thrown.

“Major League” is made up of 11- and 12-year-olds. At this level, coaches do not take part in on-field instruction and players compete as traditional fast-pitch softball is played, with the exception of 10 players in the field. All participants are placed in the batting line-up, regardless of which take part in the field.

Rikkola said the season is off to a fast and exciting start.

“This year, we have seen fly balls caught in all three divisions, a couple of inside-the-park homeruns, a triple play in the Minors, pitching duels in the Majors…many exciting plays at home plate,” he said.

The fourth and final league within the program is known as the Senior League. Girls above age 13 make up the oldest league. Competition is at its highest and allows prep athletes to compete in summer softball without violating the WIAA eligibility rules. Games in the Senior League began June 9 while the lower ages began play on May 22.

Within all levels of competition, Rikkola notes that perseverance is key.

“In softball and baseball, you learn perseverance fast,” he said. “The best players in the world only get a hit three out of 10 times…if you apply that lesson to life, eventually when you do enough things and make enough adjustments, we naturally find something and many things that we get good at.”

The list of volunteers is largely made up of parents and Rikkola said the league owes credit to those volunteers as well as past board members for giving girls the opportunity to play in the program.

“Jay and Karen Brauer have been instrumental to Little League for the past five to six years,” Rikkola said. “Before that, Darren Debroux, Steve VanDreese, and Korey Mallien really did a lot to get our organization financially sound. Some of the money they raised 10 to 12 years ago is being used for new batting cages at the end of this year.”

Games are played at Sturgeon Bay’s Memorial Field on Monday and Wednesday nights. Games will continue through June 28 with the exception of the Senior League that concludes its season on July 13 with games played on Thursday nights.