Just nine of 17 establishments asked for identification when the department sent a 20-year-old into the store to purchase beer in the operation.

Lieutenant Jeff Farley was frustrated by the result. 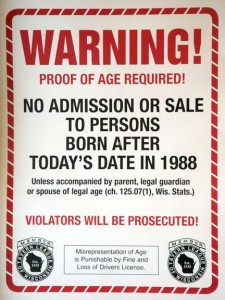 “I was really disappointed with only a 50 percent compliance when they’re selling to someone that, in my opinion, looked like they were 12-years-old,” Farley said.

It is illegal to sell alcoholic beverages to someone under the age of 21.

The eight businesses where the clerk did not check for identification received a citation and fine, as did the eight clerks individually. All violators must appear in court. A first offense of selling to a minor carries a fine of up to $500. Sellers may not be held liable if a buyer presents valid identification representing herself as 21.

“It’s not acceptable,” Farley said. “It’s time-consuming to do these operations, but with results like that I expect we will be stepping up and doing this more often.”

Most of the clerks cited didn’t even ask for identification. In one instance when the underage buyer couldn’t produce proof of age, the clerk sold him the alcohol and asked him to bring identification next time.

“What does it take to spend that extra minute to check an ID?” Farley asked.

Farley said he received calls from some town chairmen asking which businesses were sited. He also said the department will forward the information to the local government where the establishments are located. Farley said he could not release the names of individual businesses or clerks until after they have gone to court.

Though this operation only checked convenience stores, Farley said the next time it is done the department would likely check taverns.