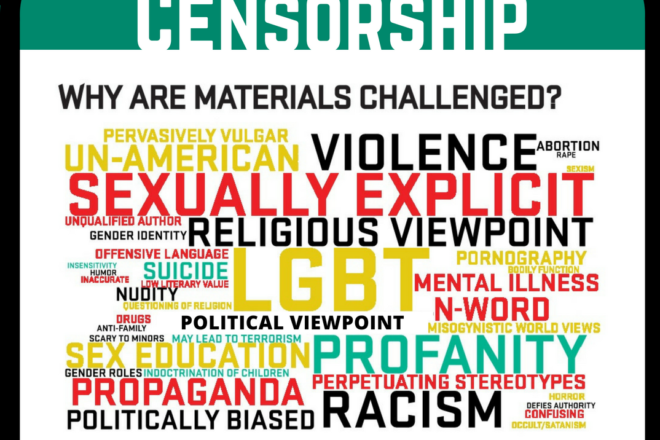 The Catcher in the Rye.

The Grapes of Wrath.

To Kill a Mockingbird.

The above titles are classics; they’re listed in the reading curriculum in high schools and college courses and have been for years. All the titles have also had a history of being challenged or banned.

Every year Banned Books Week celebrates the freedom to read. Banned Books Week 2018 is Sept. 23-29. It brings together librarians, booksellers, publishers, journalists, teachers and readers of all types in support of the freedom to seek and to express ideas, even those some consider unorthodox or unpopular. To celebrate, all branches of the Door County Library will have displays set up during the week showing some of the banned and challenged books.

Banned Books Week began in the 1980s when the Island Trees School District v. Pico (1982) Supreme Court case ruled that school officials can’t ban books in libraries simply because of their content. The books challenged in that case were Slaughterhouse-Five by Kurt Vonnegut, Jr., The Naked Ape by Desmond Morris, Down These Mean Streets by Piri Thomas, Best Short Stories of Negro Writers, ed. by Langston Hughes, Go Ask Alice, Laughing Boy by Oliver LaFarge, Black Boy by Richard Wright, A Hero Ain’t Nothin’ but a Sandwich by Alice Childress, Soul On Ice by Eldridge Cleaver, A Reader for Writers, ed. by Jerome Archer, and The Fixer by Bernard Malamud.

Books are still being banned and challenged today. A challenge is an attempt to remove or restrict materials, based upon the objections of a person or group. A banning is the removal of those materials.

By focusing on efforts across the country to remove or restrict access to books, Banned Books Week draws national attention to the harms of censorship. The books featured during Banned Books Week have all been targeted for removal or restrictions in libraries and schools. While books have been and continue to be banned, part of the Banned Books Week celebration is the fact that, in a majority of cases, the books have remained available. This happens due to the efforts of librarians, teachers, students and community members who stand up and speak out for the freedom to read.

In addition to the Banned Books display, the Egg Harbor Library at the Kress Pavilion will host a couple events to celebrate Banned Books Week. On Sept. 25 at 4:30 pm, the library will screen Bridge to Terabithia, a movie inspired by a book that has a history of being challenged. The screening is free.

On Sept. 28, 2 pm, the Egg Harbor Library will hold “Upcycle Old Books into New Journals” in their maker space. Give old, discarded books a new life by turning them into journals with a book binding machine. Participants will learn how to use the binding machine and come away with a journal. Register on facebook.com/kresspavilion or by calling 920.868.3334 ext. 3.