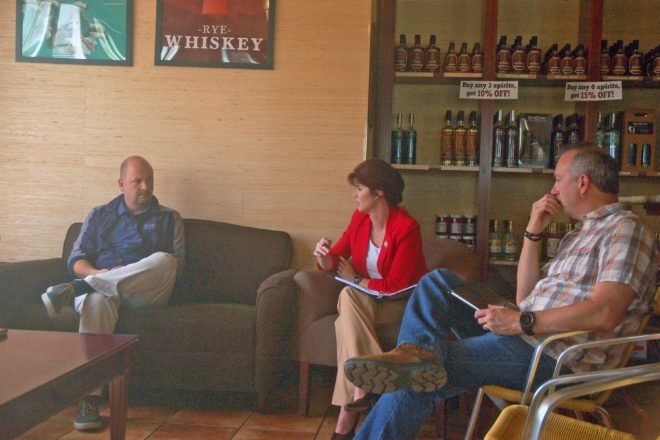 Until they learned last week from Lt. Gov. Rebecca Kleefisch, members of the Door County Wine Trail did not know why a bipartisan bill that would have allowed them to stay open past 9 pm failed when it seemed to be sailing along so smoothly.

The change would have allowed wineries to cater to parties and weddings they currently turn away because of the statewide 9 pm closing law. Last legislative session was the third time such a bill had made its way to the legislature, but in the past it was always defeated in the face of lobbying from the Wisconsin Tavern League and deep pocket brewer MillerCoors. The bill would have allowed wineries to remain open until midnight, subject to local ordinances.

The bill had bipartisan support and seemed headed for passage until an amendment was added in February, with support from the Tavern League, that would require liquor licenses at private properties that rent space for parties where alcohol is to be consumed.

Then the Wisconsin Institute for Law and Liberty got wind of the amendment and raised the alarm that the bill would effectively end tailgating on private property, thereby dooming it to failure.

It was just one more kick in the gut to an industry that is growing despite regulations that seem specifically designed to keep it the redheaded stepchild of the state’s alcohol industry.

On May 3 Lt. Gov. Kleefisch met with members of the Door County Wine Trail, who represent the seven Door County wineries and von Stiehl in Algoma, to hear about the challenges they face. Wine Trail members at the meeting included Brad Schmiling and Randy Morrow of von Stiehl Winery, Robert Pollman and Beth Levendusky of Door Peninsula Winery, Carrie Lautenbach-Viste of Orchard Country Winery and Kay Schaefer-Vercauteren of Stone’s Throw Winery.

“We know California is trying to broach on our dairy reputation, so I think it’s time Wisconsin handed it right back to them on the winery side,” she said. “We produce some of the finest wines in the United States of America.”

However, she quickly learned the winemakers are not feeling the love back from the state.

Pollman pointed out that his family also owns restaurants, and the way the distribution system works, they have to sell their wines to a distributor and buy it back to sell at their restaurants.

Schmiling mentioned working with a big distributor and seeing case sales go down until he changed to a smaller distributor who was willing to take the time on his products.

“We have 200,000 visitors come through our doors every year. That’s the bread and butter for our family business,” she said. But once those customers leave the peninsula, “If they can’t find our wine once they get home, they kind of forget about you.”

Schmiling suggested the state level the playing field. For example, a craft brewery in Wisconsin can self distribute if it makes less than 300,000 barrels of beer annually. A barrel is 31 gallons, so we’re talking about 9.3 million gallons of beer. Winery self-distribution is capped at 25,000 gallons.

“If a winery could distribute, we would have a great opportunity to compete in the marketplace,” Schmiling said, and suggested the state consider allowing wineries have the same 3.1 million gallon cap for self-distribution.

Midwest Wine Press looked at the differences in distribution between Wisconsin and Minnesota, where anyone with a winery license can produce and pour on premise and distribute and sell to any retail and wholesale site in the state. As one Minnesota winemaker said in the report, the self-distribution regulation “allows for the long-term success of the state’s wineries.”

Schmiling also mentioned that Michigan winery laws are much more liberal than Wisconsin’s.

Kleefisch said the wineries should really have pushed back hard on Senate Bill 311, the bill that would have extended winery hours, suggesting that not only do wineries not want to kill tailgating, but they think you should take some of their wines to the tailgate parties.

The Wine Trail members said the extended hours would apply more to other wineries around the state, and that they are more focused on fixing the distribution system for their product.

Kleefisch also advised the winery representatives to advocate for their cause in Madison, which prompted Pollman to say that he and the late Tim Lawrie of Simon Creek Winery used to travel regularly to Madison to talk to legislators and lobbyists. He said each time he and Lawrie explained the Byzantine laws that wineries have to operate under to the uninitiated, there was always an exclamation that “this is crazy.” They would leave thinking their point had been made and changes would finally happen, only to find that deep pocket lobbying always makes sure that winery legislation never moves ahead.

Kleefisch said she would take back what she learned from this fact-finding mission to the Governor and others.

She also suggested the wineries make their unfair treatment a public relations issue.

“An essential piece of the fabric woven into Door County now is our wineries,” she said. “They have become representative of Wisconsin’s special product, a unique place to relax, a souvenir that will remind you of the fun time you’ve had here. Maybe we shouldn’t rest our laurels on beer alone, right?”