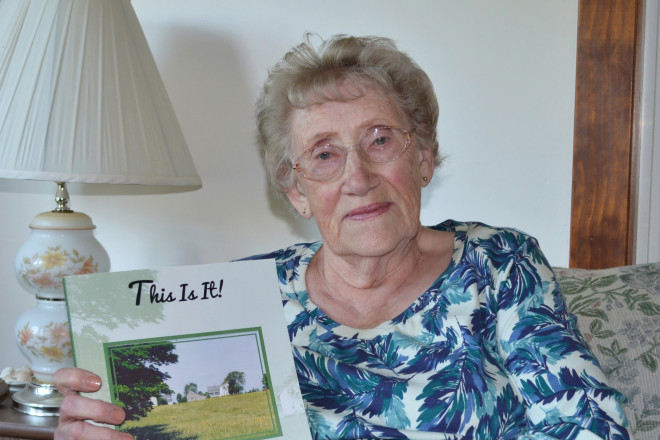 Mabel Peterson and her new book, “This Is It! My Own Story.”

When Mabel Peterson was invited by her neighbor, Gretchen Maring, to join her in Barbara Larson’s writing class at The Clearing, the first two sessions convinced her she wasn’t a writer. A chance meeting with Larson at the Piggly Wiggly encouraged her to return. That was in 1998.

Sometime after that, Mabel became excited about the possibility of producing a record of her life for her children, grandchildren and great-grandchildren. She never dreamed that anyone else would be interested in it.

She was wrong on both counts. Mabel is obviously a born writer, and the first edition of This Is It! My Own Story, the book that came out of 17 years of monthly sessions with Larson, sold out quickly after a recent book signing party at Scandia Village, where the writing group met for 11 years. There’s a long waiting list for the second edition, just off the press.

Mabel says she’s shocked at the book’s popularity, but its appeal is obvious. Anyone who grew up in northern Door County in the early years of the last century will find the story of their life here – the names, the places, the activities. And for those who didn’t live those years themselves, it’s a peek into that world.

The book’s wrap-around cover, designed by Laura Ash at Innovative Printing, features a reproduction of Rosemary Utzinger’s painting of Mabel’s birthplace, the Leeder farm on Plateau Road in the Town of Liberty Grove. Set against a green-tone enlargement of the same painting, it’s a perfect introduction to the large-size, 151-page volume.

Mabel’s story begins with information about her grandparents, the Lueders and Pahls, and includes copies of documents of Michael Pahl’s enlistment in the Union Army in 1865 and his application for a veteran’s pension in 1907. (The name Lueder was Americanized to Leeder sometime during her parents’ generation.)

Mabel was born on April 9, 1927, delivered by midwife Anna Larson. When Dr. Sneeberger arrived some time later, he said the baby might not make it through the night. “Oh well!” she writes, “I’m still here and glad of it.” An overnight stay in Egeland Hospital (now Golden LivingCenter – Dorchester) in 1934, when she mistook Ex-Lax for chocolate candy, cost $3.60 plus $2 for doctor’s services.

She grew up in the two-story stovewood house her grandfather built in 1909 for $900. Water sometimes froze in the drinking-water bucket, and there was no electricity until 1946.

There are accounts of cooking for threshers, ironing with flat irons heated on the wood stove, raising baby chicks shipped 100 in a box, shocking hay, butchering hogs, making homemade yeast and coffee from roasted barley, cherry picking, picking rocks from fields, mixing wet sawdust with arsenic to kill Armyworms, having the wheat they raised ground into their winter’s supply of flour, and playing Flinch with homemade 3” x 6” cards, with numbers stamped in purple ink.

Making soap in a huge kettle over an outdoor fire was a spring ritual. The book includes Mabel’s mother’s recipe. Her granddaughter once took a bar to school for the chemistry teacher to test, and it proved to be purer than Ivory.

Neighbors were very important in an era when travel far from home was rare. Mabel writes that the families on Plateau and Old Stage roads visited mostly with others who spoke German, while those who lived on County Road ZZ were all Swedish. Mabel often rode in a homemade cart pulled by Puppy, the family dog.

She describes the winter of 1936 as a terribly hard one, with Lake Michigan frozen solid from Chicago to Sault Ste. Marie and many roads closed. When the family could travel, they rode in a sleigh with a canvas canopy and a kerosene heater for warmth. At night, nine-year-old Mabel was frightened to hear timber wolves howling outside her home.

When Mabel was 10, her father gave her a hug and told her to be a good girl before he entered the hospital. He didn’t survive the surgery. Because she never knew her grandparents, Mabel was especially close to an older uncle and aunt, Fred and Minnie Smith, whose home on Highway 57 is now the Domicile Shop & Gallery. Like many other farm families, they made a weekly trip to the store in their horse-drawn buggy to trade eggs for grocery items they didn’t raise themselves.

The book includes a history of Appleport School. There were about 50 students there when Mabel started first grade in 1932; just 20 when she finished grade eight. Final exams in Sturgeon Bay consisted of a long day of testing in 11 subjects. Mabel played a lawyer in Keep It Under Your Hat, the senior play at Gibraltar. WWII brought nightly blackouts of their gas lamps and ration coupons for food, shoes and gas – her family was allowed just four gallons a week (at 25 cents a gallon!). Mabel’s first purchase after food rationing ended was sugar for chocolate chip cookies.

She and Hilton Peterson, the brother of Leonard Peterson, who founded Rowleys Bay Resort, were married on Sept. 4, 1946, at her parents’ home. Ervin Bastian led the shivaree that night, firing a shotgun by the front door. The Peterson’s three children, Winnie, Michael and Edward, were raised on the Peterson grandparents’ farm on Townline Road, where Mabel still lives. When Winnie was born, Hilton, who had been adopted by the Peterson family, said, “Now I have something of my own!”

Her life has been defined by hard work. When her father died at 45, she and her older brother and sister worked on the farm beside their mother to make ends meet. On Fridays and Saturdays, Mabel and her mother cleaned their Baptist church at the corner of ZZ and Woodcrest, for which her mother received $10 a month. Her first job after graduating in 1945 was at the Shorewood Inn in Ephraim. She later became a live-in housekeeper for Ellis and Sally Marshman, teachers at Gibraltar, and later for several other families.

After she and Hilton bought his parents’ farm in 1949, she helped to maintain the farm and their orchard, Cherry Grove, while he worked as a mechanic in Sister Bay. She also worked for the Seaquist family during apple harvest, picking 1,000 bushels one year.

When Hilton died in 1972, leaving Mabel a widow at 45, she went to work as a janitor for the Ephraim School. Later she was hired by the Gibraltar School District, first as an assistant cook, then head cook and finally as library clerk. She retired in 1992. In the summers, from the time she was a teenager, she worked at Little Sister Resort, in the beginning scrubbing the floors of the cottages on her hands and knees. By 1977, she was the head cook. She retired from that job in 2007, at age 80.

Mabel’s work on her book was put on hold for two years while she cared for her son, Ed, during his long illness and subsequent death from cancer in 2003. Through the loss of her father when she was 10, her husband at age 50 and her son when he was 38, she says her strong Christian faith has helped her carry on.

Today she’s the matriarch of a family of children, in-laws, grandchildren and great-grandchildren totaling 17. When great-granddaughter, Brianna Jackson, graduated from Gibraltar in May 2015, Mabel’s family was recognized for having four generations of graduates: Mabel in 1945; daughter Winnie Peterson Jackson in 1965; grandson Christopher Jackson in 1994; and Brianna 21 years later.

In closing, Mabel says, “Life has not ended for me. There is much to do. I have the privilege of taking care of the Koinonia Kupboard food pantry at First Baptist Church [of Sister Bay]. My blessings have been many and I want to be useful as long as the Lord gives me strength. I’m in the phone book for anyone who’d like to call and get a book.”