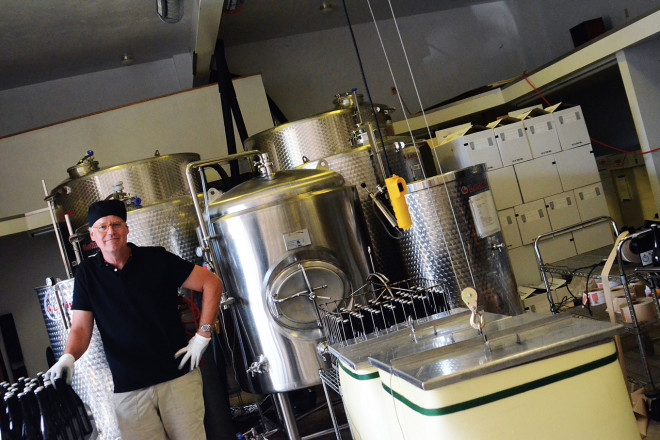 Bob Purman was 11 when he made his first bottle-conditioned product, a root beer.

“Within three days of bottling, I’d be in bed at night and two floors down in the basement, I could hear the pop and then a geyser hitting the ceiling,” he said.

He tried using masking tape to keep the corks in place, but they, too, blew.

As a last resort, he slid the remaining bottles into a drawer in his father’s desk.

“They fit perfectly and I figured the wood would hold the corks in,” he said.

Instead, the bottles slowly leaked and warped the drawer shut.

These days Purman is much more sophisticated in producing bottle-conditioned beverages. He and his wife Yannique are owners of Island Orchard Cider, where Purman produces about 20,000 gallons – or 50,000 bottles – of cider annually with apples grown at their Washington Island orchard.

“We started planting trees in about 2006,” he said. “My wife’s father is from the coast of Brittany. We used to visit them and discovered the ciders of Brittany and Normandy. We decided we would do that here in the United States. That was about 2003-2004. We started planting trees on the island in 2006. We’re up to 2,400 trees or so, all French, English and American cider cultivars, very little edible fruit, with higher tannin, higher acid apples for cider. It’s becoming more common to plant the French and English cultivars, but I believe we were the first ones doing it here in Door County.

“It’s agriculture and it’s a long-term commitment because you’re putting trees in and you’re not sure how they’re going to do here,” Purman continued. “Some are not winter hardy. Some absolutely thrive in our limey shallow Niagara escarpment soil. Some of them didn’t do well at all. So we found the ones that worked well and tried to increase our stock in those, and then it’s a matter, for the most part, of blending them to get the best tasting cider.”

In the beginning, Purman considered it a hobby. 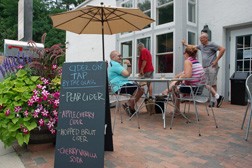 Guests enjoy the patio at the Island Orchard tasting room in Ellison Bay.

In 2011 they opened a plant to produce cider in Ellison Bay.

“We decided on Ellison Bay because it’s pretty close to the ferry dock to bring our apples across,” he said. “We get a weekly truck to pick up product to take to distributors, so it made sense to have our fermentation plant on the mainland.”

The Ellison Bay plant has also served as a tasting room since 2011, but this summer they received permission from the Town of Liberty Grove and Door County government to open an outdoor patio in front of their building just off Hwy. 42 on Garrett Bay Road.

On this particular Friday afternoon, a steady stream of people are going through the tasting process inside the plant, and then purchasing cider by the glass to sit on the patio and enjoy the fading afternoon.

“It’s awesome because people can sit on the patio in the shade,” Purman said. He mentions that he also began making a cherry vanilla soda – with cherry juice rather than cherry syrup – for those who can’t or don’t drink alcohol.

According to ACNielsen, which tracks off-premise sales of alcoholic beverages, the hard cider market grew by 71 percent last year, while liquor sales increased by 2.4 percent, wine increased by 3.3 percent and beer sales decreased by .4 percent. 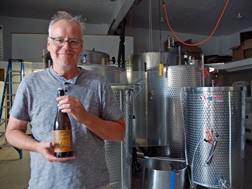 “We started this based on our own interests. We wanted to make cider from our apples,” Purman said. “What we didn’t realize was there was going to be a prairie fire of interest in ciders. When we started this, none of the distributors we talked to gave a fig about having a cider in their distribution. It was such a low-produced product here in the States.”

Purman mentions that his bottle supplier had no idea about cider when Island Orchard started bottling in 2011.

“We picked the bottle that we liked,” he said. “It would handle atmosphere so we could have either a carbonated or bottle-conditioned product in it. I think they were originally for beer, a 750-ml large format beer bottle. Within two years his website says, ‘Your partner in the cider revolution,’ whereas two years before he had no interest or knowledge of cider at all. All of a sudden it became a thing and we have no idea why. It hasn’t changed what we wanted to do, but we do get sort of sucked into that vortex.”

Asked what the best seller is, Purman said they all sell well.

“For a long time the guys in the tasting room said Pear is our best seller, but it actually isn’t. The Brut is probably the best seller.” 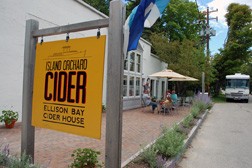 Subtlety is key to the flavor profiles Purman is creating.

“Our goal is flavor without a lot of residual sugar,” he said. “We initially called it Normandy-style cider. That’s our influence for sure. We’re tasting these ciders from Brittany and Normandy. We’re like, that’s what we want to do. And we have a perfect region to be doing this in, but we are doing things our own way. It’s sort of the New World way of doing things. It is a combination of our influences, but I almost don’t want to say Normandy-style anymore because we’re developing our own things from our own fruit.”

One of those bold New World ideas Purman had was to add hops to the Brut cider.

“It’s one of those things where you think you’re inventing something and you learn that 50 other people had the same idea,” he said. “I started experimenting with hops about three years ago. And then about 2½ years ago, one of the Oregon producers released a hopped cider and now everybody’s got them. I really like ours a lot. There are a couple of things working together. The hops are from Jeanne Majeski right here in Door County. She has Cascade hops. I try to buy everything she’s got every year. I started out with just small batches of it and then realized it’s going to work very well. What we’re doing, we’re dry hopping our Brut cider and then we’re bottle conditioning it, so it has this really strong fruit profile, but then it has the bittering of the hops. There’s something about the bottle conditioning that brings out the fruit stronger, so it was a really good way to treat the product.”

Purman seems to revel in the unpredictability of cider making.

“It changes every year. It’s an evolutionary thing,” he said. “There are set points. I do try to keep residual bottles around from previous harvests because I want to see where we were and where we’re going. There are seasonal changes, and then there is our growth as cider makers. Our palates are developing. Our trees are getting more mature. We have more stuff to blend with. Every year it is a challenge because you’re trying to meet at least the set points from the year before, and also trying to make it better.”