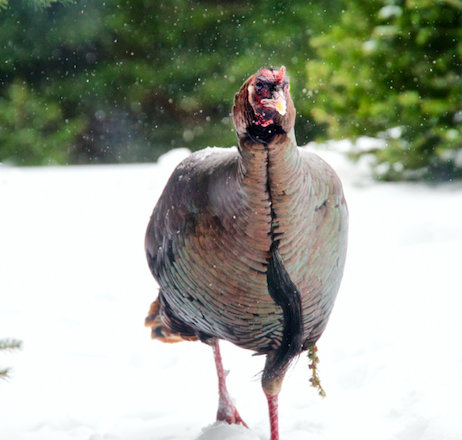 Wild turkey toms are gobbling from the roost and strutting once down on the ground, trying to impress the hens. Photo by Len Villano.

Wild turkey toms are gobbling from the roost and strutting once down on the ground, trying to impress the hens.

But gobblers anticipating the upcoming mating season aren’t the only ones with spring fever. The first northbound sandhill cranes, tundra swans and red-winged blackbirds were spotted in southern Wisconsin last weekend, and the first anglers in small boats were seen trolling the Lake Michigan shallows.

On the mostly frozen waters of Green Bay, there’s still more than a week left to chase yellow perch before a two-month spawning closure kicks in – but that doesn’t mean it will be safe to do so.

Mild temperatures – including anticipated highs in the mid- to upper 40s this weekend – are expected to quickly deteriorate shoreline ice, making it risky business for even cautious anglers on foot. Steer clear of creek mouths, cracks, slushy areas, dark-ice areas, docks, shallow reefs and ship-traffic lanes; use an ice chisel to pound-test the ice as you slowly work your way out in other spots.

Even with the March meltdown, it’s likely there will be enough ice in some areas where fishers will be able to stay on top for a week or two yet. Check with an experienced guide or an employee at a trusted bait-and-tackle shop for the latest conditions.

• Ice fishing shelters don’t have to be removed from the Green Bay ice until March 15, but you might not want to wait. Portable shelters may still be used past the deadline; just remove them daily when not in use.

• New fishing licenses for the 2020-21 season are now available. As always, those age 15 and younger don’t need a license to fish in Wisconsin. Learn more at gowild.wi.gov, or visit the Sturgeon Bay DNR Service Center.

The first of two spring County Deer Advisory Council meetings will be held next month in Door and Kewaunee counties. Both offer great opportunities for the public to provide input on deer management.

Each county council has a chair and an alternate chair who are members of the Conservation Congress, plus seven citizens who represent agriculture, forestry, tourism, transportation, local government, hunting organizations and the Deer Management Assistance Program.

The first meetings for 2020 are set for April 6, 7 pm, at the Door County Government Building in Sturgeon Bay; and April 8, 7 pm, at the Muskrat City Sportsman’s Club north of Kewaunee. You can find county contacts and deer data online at dnr.wi.gov/topic/hunt/cdac.html.

Hunters, anglers and other outdoors enthusiasts are encouraged to learn more about the annual DNR spring fish and wildlife public hearing and Conservation Congress (CC) county meeting April 13. Locally, the meetings will start at 7 pm at both Sturgeon Bay and Kewaunee high schools.

The hearings offer a chance for the public to provide input and testimony on advisory questions related to fish and wildlife management. County residents also have an option to run for a seat on the Conservation Congress or elect delegates to the CC to represent their county regarding natural-resources issues.

Again this year, there will be an opportunity to weigh in on the questions through an online link that will go live April 13, 7 pm, and remain open for 72 hours. Read all about it, and see a list of the questions that are open for public input this year at dnr.wi.gov/about/wcc.

Public comments on the DNR’s proposed 2020 waterfowl hunting season structure will be accepted through midnight on March 13.

You can also learn more at a meeting March 11, 7 pm, at Fox Valley Technical College, Room BC141, in Appleton.

The seasons will be based on last year’s continental waterfowl population estimates, which were among the highest since the U.S. Fish and Wildlife Service’s surveys began 64 years ago.

To view and provide input on the 2020 waterfowl season options online, visit dnr.wi.gov/topic/hunt/waterfowl.html.

As of Feb. 28, Lake Michigan was 15 inches higher than last year and four inches above the previous record, set in 1986.

Although those estimates were an inch lower than the previous week, lake levels will begin their seasonal rise as the snow melts throughout the Lake Superior and Lake Michigan basins. Lake Michigan is projected to rise two inches this month.