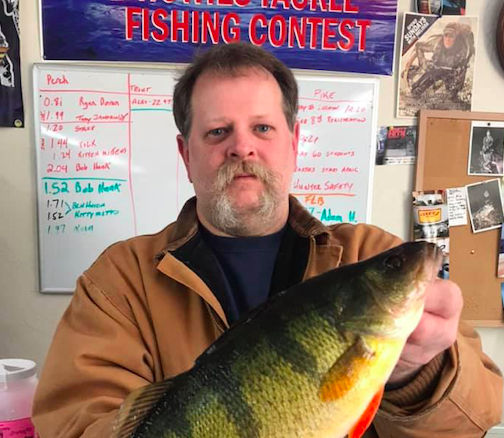 On Feb. 25, Eric Normann was the leader of the monthly fishing contest at Howie’s Tackle in Sturgeon Bay. Normann was able to muscle this monstrosity of a perch onto the ice over the weekend. It measured 15 inches and 1.97 pounds. Photo courtesy of Howie’s Tackle.

March is knocking on the door – a month filled with opportunities for anglers who are looking to catch some of the heaviest fish of the season. They’ll need to be vigilant and aware of changing conditions, but there will likely be plenty of ice for foot traffic at many locations during the coming weeks.

A string of very cold days and nights this week will be followed by more seasonal highs in the 30s. Expected lows in the teens and 20s will keep a tight grip on the ice that’s already out there.

Some of the heaviest perch, pike and walleyes of the year are caught in March, when the females are loaded with spawn. For most of the month, catches will come through the ice, but some shoreline areas could open up later on.

The only closure on Green Bay waters is the March 15 deadline for yellow perch. All other species remain open on the main bay. Many small streams and ditches – tributaries of Green Bay and the Fox River – close to other game fish starting March 1. Major Green Bay rivers remain open for most species. March 7 is the last day to fish for bass, pike and walleyes on inland waters that don’t remain open all year.

There are a few trout being caught through the ice in lakeshore rivers. That’ll heat up after ice-out, which occurs in rivers much earlier than on the bay.

On the hunting side, cottontail-rabbit gunners will get an extra Leap Year day in 2020, when the season will close Feb. 29.

Anglers will need new fishing licenses for the 2020-21 season by April 1, and they’ll go on sale soon. The new fishing regulations are pending legislative approval and should be available soon as well.

One of the new rules allows catfish and bullheads to be taken by bow, by crossbow or by hand, coinciding with the rough fish spearing season in most cases. The hand-fishing season will run June 1 – Aug. 31.

Hunters registered 3,792 wild turkeys during the fall 2019 wild turkey season – a small number compared to the nearly 75,000 tags that were issued.

DNR upland wildlife ecologist Mark Witecha said reductions in the fall harvest during the last 10 years are due mainly to a decline in hunter participation and effort. He said a large portion of tag buyers pursue turkeys as a secondary species versus the intentional targeting of gobblers during the spring hunt.

The application period for the 2021 bear hunting season has been delayed because of legislative review, but it’s expected to open soon. The deadline to apply remains Dec. 10.

There will be new bear management zone boundaries courtesy of a new unit being added in 2021. It is not known how these changes will affect harvest permit wait times, but there will likely be no significant changes across zones A, B, C and D.

Hunters of black bear who successfully drew permits for the 2020 season have already been notified. More than 119,000 hunters applied for either a permit or a preference point; there were 11,535 available permits.

The ninth Wisconsin Citizen-Based Monitoring Network Conference will be held March 20-21 in Manitowoc for anyone interested in monitoring or learning about animals, plants, water quality and other natural resources in the state.

Read more about the conference and register at wiatri.net/cbm/conference/conf2020.cfm.

Women are the fastest-growing demographic in hunting and now account for as much as 15 percent of hunters nationwide, according to a study from the Fish and Wildlife Service.

The number of first-time adult male hunters has declined by more than 30 percent during the last 15 years, while the number of women hunting for the first time increased at roughly the same rate.

Landowners can enroll in the Deer Management Assistance Program all year, but those with 160 acres or more are encouraged to do so by March 1 to be eligible for a site visit by a DNR biologist and forester in 2020.

Get all the details at dnr.wi.gov/topic/WildlifeHabitat/DMAP.html.

As of Feb. 21, Lake Michigan was 38 inches above its 100-year monthly average, 16 inches higher than last year and five inches above the previous record, set in 1986. Water levels were up 65 inches from the record monthly low, set in 1964.