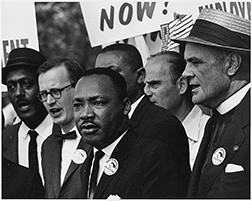 Martin Luther King, Jr. was born on Jan. 15, 1929. Since 1986 the third Monday in January has been recognized as a federal holiday honoring the civil rights leader.

The number of years the Montgomery bus boycott lasted, beginning on Dec. 1, 1955. “We have no alternative but to protest. For many years we have shown an amazing patience. We have sometimes given our white brothers the feeling that we liked the way we were being treated. But we come here tonight to be saved from that patience that makes us patient with anything less than freedom and justice,” King wrote in Stride Toward Freedom: The Montgomery Story.

King’s age when he entered Morehouse College (he skipped 9th and 11th grades in high school). He graduated with a bachelor’s degree in sociology at age 19.

The number of times King was jailed.

The height in feet of the Martin Luther King, Jr. Memorial Stone of Hope on the National Mall. Etched on one side is a sentence from King’s Aug. 28, 1963, “I Have a Dream” speech: “Out of the mountain of despair, a stone of hope.”

King’s age when he received the Nobel Peace Prize. He was the youngest man to have received the price. He turned over the $54,123 award to the furtherance of the civil rights movement.

King’s age when he was assassinated at the Lorraine Motel in Memphis on April 4, 1968, where he was to lead a protest march in sympathy with striking garbage workers.

The year King was elected president of the Southern Christian Leadership Conference, an organization formed to provide new leadership for the burgeoning civil rights movement.

The number of miles King traveled while advocating for civil rights between 1957 and his murder in 1968. It is also the number of signatures on the King Center petitions Coretta Scott King (King’s widow) and Stevie Wonder presented in 1982 to Tip O’Neil, Speaker of the U.S. House of Representatives, in support of a federal holiday.