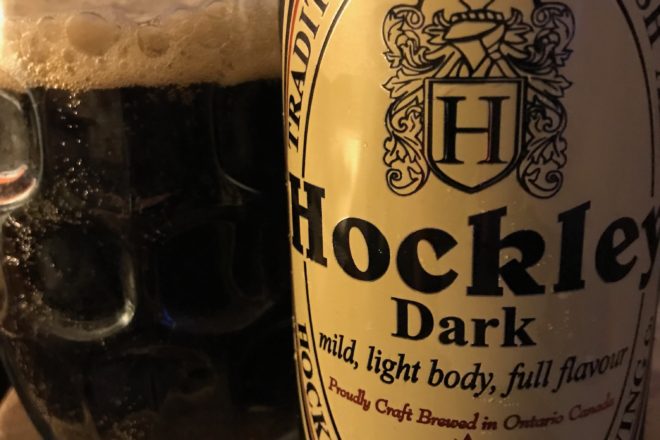 I was particularly interested in one called Hockley Dark, which the label says is an award-winning traditional English ale by Hockley Valley Brewing Co. of Orangeville, Ontario.

The website declares this a “brunette with the body of a blonde,” created by the brewmaster with a “penchant for English ale.” It’s also described as “an ingenius [sic] hybrid of a Northern Brown Ale and a Midlands Mild, with a body tweaked to give it a lighter, more North American appeal.”

I get all that. It does have something reminiscent of Newcastle Brown Ale, complete with what I’ve always thought of as a slightly chalky finish.

The other part of that description brings out an old prejudice that goes back to when I was a very young man living in England in the 1970s. My mates and I referred to mild as “old man’s beer” because old men were the only ones we ever saw drink the stuff. We joked that it was brewed with old socks because we detected a sour note to the “mild” beer. When I say young man, I exaggerate. We were kids, with all the ignorant notions kids wield against a world they don’t really know.

I’d be happy to sit in an English pub today and order a pint of mild.

But in lieu of that, I’ve got this 5 percent Hockley Dark to remind me of my foolish past.

I was wrong about the second beer. Although it was sold in Canada, it’s a German-brewed pils. It’s called Wernesgrüner Pils Legend Pilsner, from the Wernersgrüner Brewery of Steinberg-Wernesgrün, Saxony, Germany, which, according to the label on the can, has been around since 1436.

Oh, yeah! Beautiful to look at with the high, white head standing on top of the pale golden beer. And even better to taste – crisp, clean, bright, with a snappy hop bite finish.

As I said, I’ve never heard of this beer. Do they sell it only in Canada? If so, why? What’s wrong with us?

Anyway, this is a tasty German pils. Lucky Canucks!

Thanks to the anonymous person who brought me these two beers.