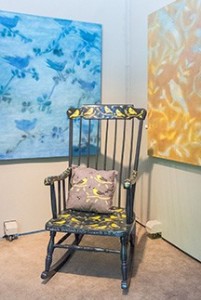 Midsummer’s Music Festival will celebrate 25 years of bringing classical chamber music to Door County’s residents and visitors by merging two of the area’s most beloved segments, art and music, into its Great Musical Chairs project, debuting June 24 in Sister Bay.

Inspired by “The Art of the Violin” fundraiser project of the Perlman Music Program in Florida, in which local and international artists transform ordinary violins into extraordinary pieces of art, longtime Midsummer’s board member Sue Jacobs wondered if the Door County organization couldn’t do something similar.

“It was very successful,” Jacobs said of “The Art of the Violin.” “And it led me to think, ‘I wonder if we should do something to gain awareness for our organization and hopefully make a little money at the same time?’”

Two words popped into her head: musical chairs. Jacobs initially wondered if a game of the traditional childhood game could be incorporated into a Midsummer’s performance but when the logistics proved too difficult, she took a look at two successful public art events in Door County: Egg Harbor’s EGGstravaganza and Sturgeon Bay’s Street Art Sturgeons.

Each of those annual events successfully fused the community’s traditions with Door County’s thriving arts scene and Jacobs was confident that Midsummer’s Music Festival could do the same. 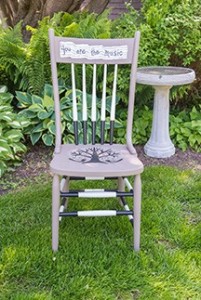 Bonnie Hartmann’s creation, “You Are The Music.”

“We didn’t want, necessarily, the artists to do something musical with the chairs. We wanted them to paint in their own style or however they were going to decorate it,” said Russ Warren, marketing director for the organization.

In the months since, the artists have transformed the chairs into pieces that speak to the power of music. Sturgeon Bay artist Bonnie Hartmann looked to poet T.S. Eliot’s poem, “The Dry Salvages,” for inspiration for her chair, “You Are The Music.”

“It could be interpreted in several ways,” Hartmann said. “Midsummer’s Music is the music. Nature is the music that surrounds us. And maybe that very special someone in your life is the music!”

Instead of covering up the floral needlepoint of the seat, she used a symbol in appliqué to enhance it. 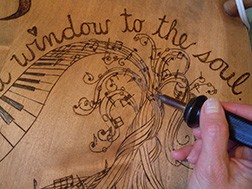 Bethany Kirwen in the process of wood burning her chair, “Notes Of Encouragement.” Submitted photo.

“Wence (Sandra’s husband) and I loved the idea of flowers coming out of a sound hole, pointing to the organic nature of music,” Martinez said.

The word “nature” has come up a number of times when artists have been asked to describe their transformed chairs, with a few more paying tribute to nature’s musicians – birds.

Egg Harbor artist Margaret Lockwood’s winter was brightened with the painting of her new series, “Birds On Branches,” which made its way onto her rocking chair, appropriately titled “The Goldfinch,” in honor of Antonio Vivaldi’s concerto for flute in D Major.

Liz Maltman, of Fish Creek, saw the potential for brightness when she spotted the dark wood antique chair she was responsible for revamping.

“I wanted to do birds because I paint birds often and birds are musical, especially canaries which are also bright yellow,” she said of her aptly titled “Canary Chair.” “The canaries took shape among green and blue leaves. I added mythical birds as well in blue with bits of gold. I’m sure the mythical birds are also musical.”

Bethany Kirwen, a Sturgeon Bay pastel, acrylic and mixed media artist, used the opportunity to showcase a different kind of art that she is self-taught in – pyrography, or wood burning. The painstaking process took a great deal of attention, caution and patience along with a heavy dose of inspiration from nature and her late music-loving mother.

“Thanks to my mother who instilled in me a love of music when I was a youngster, I decided to honor her in a very subtle way in this particular piece by placing her piano music on one of the surfaces,” Kirwen said. “Since she passed last October, I have used something from her in every one of my exhibits in one form or another. It is a fun way for me to thank her for all of the ways she supported and encouraged my artistic endeavors all throughout my life.” 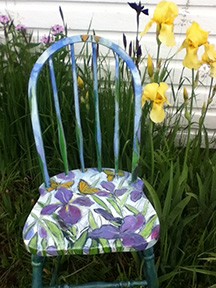 The result is her chair, “Notes of Encouragement,” which features a wood-burned musical tree, its branches trailing music notes and piano keys.

As photos of the chairs in-process have trickled to Jacobs, she has found a great deal of gratification watching her idea come to fruition.

“They’ve not just painted some chairs; they’ve given it a great deal of thought and tied it into our Midsummer’s programs,” Jacobs said. “Each one is different and each one is amazing.”

The Great Musical Chairs will be on display at Sister Bay Trading Company for viewing and silent bids from June 24 – July 11. An opening reception will be held from 5 – 7 pm on Wednesday, June 24.

On July 12, the chairs will be transferred to the Big Top Door County event in Baileys Harbor, where the evening’s musicians will be seated on them for their performances and then the chairs will be up for a live auction. Bids placed on chairs while on display at Sister Bay Trading Company will be held in proxy and included among the live auction bids.

“I hope it’s going to be fun. That’s the thing I like to see,” Warren said. “It would be a great fundraiser and I hope it turns out that way but I think getting people to go to Sister Bay Trading Company and to see the chairs, see the talent that these artists have and what they can create is important.”