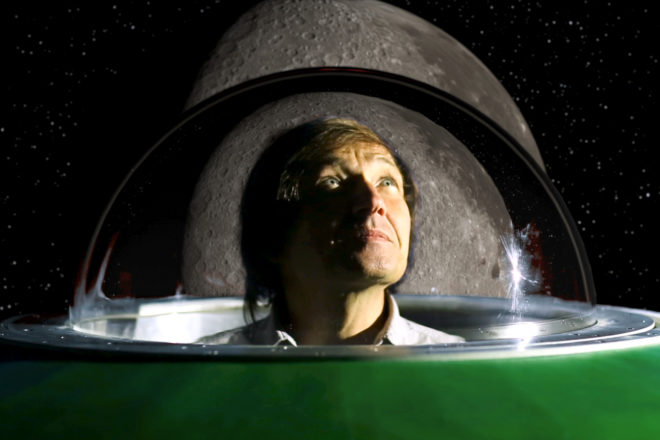 Because you’re reading this in the Pulse, odds are you already know that Door County has inspired a thriving community of writers, musicians, sculptors and artists of every age and genre, whose work is often displayed or commented upon in these pages. Let’s not forget to include filmmakers on that list, too.

I recently had the opportunity to watch The Emissary (PG), a home-grown movie conceived of and crafted by county residents Tim and Holly Erskine. Released in 2015, it follows Feed the Fish (2010) and precedes June Falling Down (2016), but it fits snugly in the category of local productions that star local actors, use local landmarks as settings and tell quirky stories in a congenial, funny, northeastern Wisconsin kind of way.

If Manitowoc Minute man Charlie Berens were a film genre, those three titles might be exhibits A, B and C.

What distinguishes The Emissary from the others, however, is that it aspires to be an F/X-driven sci-fi film, too, with some pretty impressive visual tricks up its sleeve, considering the obvious constraints of the budget. In fact, the look and sound of the film are quite sophisticated, providing some gorgeous views of the county from Gills Rock to Sturgeon Bay, and featuring several songs written and performed by writer and director Tim Erskine.

Erskine also stars as Jim, an affable, good-neighbor sort of guy who looks a little like Gene Siskel from back in the day (bonus points for those of you who remember Roger Ebert’s At the Movies co-star). Jim’s circle of friends include Andy, a failed clown wannabe (Paul Erskine); and Molly (Holly Erskine), the Ephraim librarian. Jim enjoys flirting with her over nerdy science books but can’t quite figure out how to move things along to the adult romance section.

Jim’s life becomes complicated by the arrival of Koyper (Peter Ciesla), an emissary from outer space who’s been sent to neutralize a power generator that was lost when one of his planet’s spaceships became involved with the sinking of the Edmund Fitzgerald in 1975. The generator could blast a crater the size of Rhode Island into Lake Michigan, erasing our treasured thumb of land, unless Koyper can find it in time. Wouldn’t you know, it happens to be on a Door County dairy farm owned by the cantankerous Stewart Wafflequisp (John F. Wilson), and the generator is about to be sold to an unscrupulous energy tycoon (Mark Moede) from Chicago.

This plot is just the clothesline upon which to hang some goofy episodes in which Jim and Andy try to figure out Koyper while he does the Door County tourist thing, from go-carts to miniature golf to Wilson’s ice cream cones. Eventually, these three stooges get around to saving the county in the nick of time, but first – what are those goats doing on the roof of that restaurant?

There’s fun to be had picking out familiar faces and places as the film unwinds. The cast includes such Door County fixtures as Ed DiMaio, Bob Desh, Jess Holland, Pat Palmer and Joel Kersebet; and such county staples as the oversized chairs at Julie’s Park Cafe, Renard’s cheese curds and the Michigan Street Steel Bridge in Sturgeon Bay come into play.

The Emissary is available on DVD (I checked out a copy from the library) and streaming through Night Sky Ventures. It’s worth a look-see if you have a hankering for something vintage Door County.