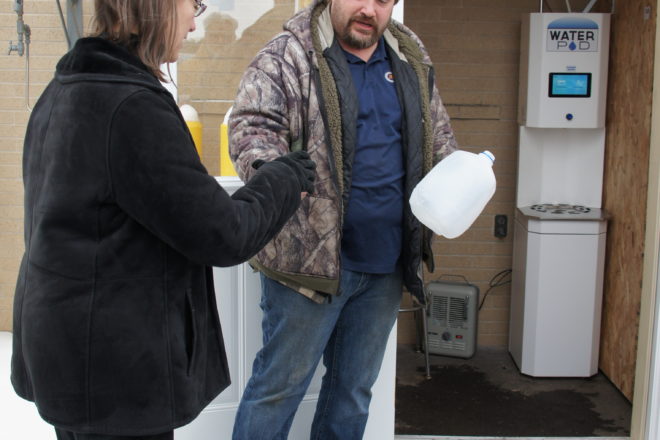 Stonehouse Water Technologies has supplied a water pod at Algoma High School where area residents can get clean city water.

In 2010 the United Nations General Assembly explicitly recognized the human right to water and sanitation and acknowledged that clean drinking water is an essential human right.

The State of Wisconsin apparently did not receive the memo on the clean drinking water resolution, because a third of Kewaunee County residents using well water are still unable to use that well water due to contamination.

Ask Charles Bensinger, director of water analytics at Stonehouse Water Technologies in Milwaukee, why state and federal authorities appear to be dragging their feet with Kewaunee County’s continuing third world-like water issues and he will laugh and tell you that’s a gross understatement of the situation. He said complete avoidance is a better description of government response.

“Bringing relief to those who need it, this is a big issue. To avoid it and hope it goes away is unrealistic,” Bensinger said. “Unfortunately, I don’t see it getting better in the near future.”

Stonehouse Water Technologies did apply a Band-Aid to Kewaunee County’s water problem in January when it donated a water pod to provide free City of Algoma water that has been treated to the extra filtration of the Stonehouse water pod system. The system was installed at Algoma High School. 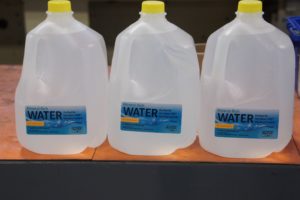 “People are able to obtain water 24/7 there. We’d like more people to know about it and use it,” Bensinger said. “It’s municipal water that goes through further filtration in the pod because municipal water systems don’t deal with all the contaminants in the water that haven’t been regulated yet by the EPA. It just gives as another level of security.”

The company placed their water pod in Algoma on their own dime.

“We would like to put in three more of these water pods because Algoma is not the most convenient place for the people in the zone of contamination there,” Bensinger said. “We went down and met with the EPA last week and asked if they would provide some funding for that. They were polite and well mannered but they didn’t really give us any concrete answers at this point. And they’re waiting for confirmation from the DNR to commit. We would love to have some help on finding some funding sources to put in more of these distribution points.”

“We have to figure out a way to make this convenient for people to pick up water,” he said.

Bensinger said he and his colleagues at Stonehouse thought the installation of the water pod would spur more activism and agitation in the community for corrective actions.

Bensinger breaks the problem down into three stages.

The first stage is “get clean water to people who can’t use their faucets anymore.” They did that with the water pod installation.

Now they are working on stage 2, which is developing a cost-effective filter for nitrate and getting a system approved for dealing with individual wells.

“We’re working hard on that, how to build systems for people with contaminated wells,” Bensinger said. “That’s a little more challenging.”

“Shouldn’t we be thinking of dealing with the source of pollution as well?” he said. “That gets into a lot of politics and a lot of expense. But it needs to be addressed if we are concerned about true sustainability. We’ve got to look at these things.”