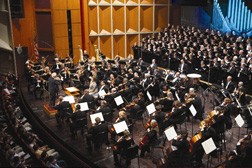 On Oct. 20 at 7 pm, the Milwaukee Symphony Orchestra (MSO) will present a diverse, rousing program of classical music at Door Community Auditorium. The MSO, widely revered as one of the finest orchestras in the United States, will perform music from Beethoven, Schumann, Brahms, and Wagner, tracing the profound influence of Beethoven on the generation of composers that came after him.

At the helm of MSO’s DCA performance will be the dynamic, up-and-coming conductor Francesco Lecce-Chong, known for his appearances with dozens of acclaimed orchestras worldwide. His vibrant performances and growing reputation have brought him distinction, including the Presser Music Award from The Presser Foundation.

Leece-Chong says, “During the program, I’ll be talking about the influence of Beethoven on the generation of composers after him. To Schumann, he was the struggling artist; to Brahms, he was a master of musical structure and proportion; and to Wagner, Beethoven was the great philosopher. In Beethoven’s most famous achievement, the fifth symphony, we see all of these qualities in one powerful work that shows the immense influence Beethoven had on composers then and now.”

The MSO’s concert is sponsored by William and Colette Goldammer of the Goldammer Family Foundation.