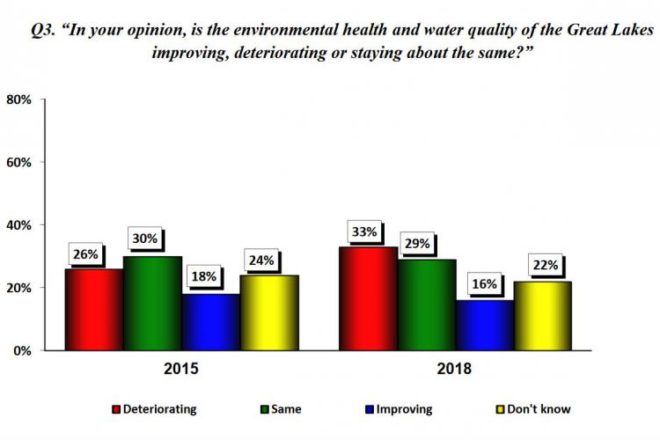 Results are strong and consistent for protecting the Great Lakes in the recently released second Binational Great Lakes Basin Poll.

The telephone interview poll was generated by the Great Lakes Water Quality Board and submitted to the International Joint Commission. The last poll was conducted in 2015.

In this most recent poll, 88 percent of respondents said it is important to protect the Great Lakes. That is up from 85 percent in the last poll. That response was even stronger – 98 percent – from indigenous respondents.

Pollution was cited as the most significant danger threatening the lakes, with invasive species coming in second. Climate change is a new danger identified in the 2018 poll, cited by 3 percent of respondents.

An incredible 17 percent of respondents said they were unaware of any threats to the lakes, which is down from 25 percent in 2015.

When asked whether the Great Lakes are deteriorating, 33 percent said yes (versus 26 percent in 2015). Twenty-nine percent responded that the lakes are staying the same (down from 30 percent in 2015).

Five percent of respondents believe there are too many regulations in place to protect the Great Lakes, although the percentage jumped to 95 in the responses from the indigenous community.

Fifty-five percent said they would be willing to pay more for consumer products as a result of increased regulations to protect the lakes, with 27 percent being unsure and 18 percent do not want to pay more.

Twenty-eight percent of respondents do not know where their wastewater ends up (compared to 33 percent in 2015).

A large majority of residents believe the Great Lakes should be protected for the benefit of fish and wildlife (79 percent) as well as their economic significance to the region (78 percent), and their importance to human health now and for future generations (74 and 77 percent, respectively).

The importance of individual responsibility for protecting the health of the lakes is cited by 80 percent of respondents, up two percent from the 2015 poll, including such actions as being careful of what they dispose down the drain (83 percent), conserving water (74 percent), engaging in online forums and interest groups who address Great Lakes issues (37 percent) and contacting elected and government officials to express their concerns (32 percent). While 30 percent were unsure what steps they could take in 2015, 25 percent were unsure in the 2018 poll.

A large majority, 80 percent, feel it is important that an organization like the IJC exists to facilitate cooperation in Canada and the United States on issues impacting the Great Lakes, and to ensure that the goals and programs outlined in the Great Lakes Water Quality Agreement are accomplished. This majority increased from 74 percent in the 2015 poll.

“It is clear that the Great Lakes community cares deeply about the resource, is prepared to accept increased costs to protect it, and recognizes personal responsibility to be part of the solution,” said Great Lakes Water Quality Board U.S. Co-Chair David Ullrich upon the report’s release.

Rob de Loë, Canadian co-chair of the board, said, “This second poll shows that water quality is a top-of-mind issue for citizens in the basin, and serves as a reminder of the enormous shared obligation to protect and enhance the lakes.”

You can view the poll at ijc.org.