“The Friends of the Sturgeon Bay Public Waterfront will continue its positive and productive efforts to develop a vibrant public waterfront in Sturgeon Bay and to ensure a more inclusive and citizen-driven vision for Sturgeon Bay’s future despite today’s ruling regarding the court venue,” said member Dan Collins.

The City of Sturgeon Bay Ice Rink located at Memorial Field is now open and ready to use. Ice skates can be checked out when the warming house is open and an attendant is on duty.

County of Door: With approval of Resolution 2016-07 by the Door County Board of Supervisors at its Jan. 26 meeting, the county has joined with other counties across the state in objecting to “piecemeal” legislation being inserted into the state budget, particularly the shoreland zoning rule changes that were inserted into the 2015-17 budget, “without meaningful notice, public input opportunity, review by and input from local units of government, or analysis by the Wisconsin Department of Natural Resources,” the resolution states. It goes on to say, “Predictably, the manner in which this legislation came about has resulted in a general state of confusion as to interpretation and implementation of the 2015 Wisconsin Act 55 shoreland zoning revisions.” “The consensus is it’s not a good way of doing business,” said county supervisor Ken Fisher. “So we are asking them to stop and we are using the land use that they dealt with last time out as the item of contention.” County Planning Dept. head Mariah Goode said her department is struggling to provide clear rules for people, and said there are as many as six bills out there now dealing with other zoning changes, including a “fix-it bill” for the changes inserted into the budget last summer. Goode said her department supports the fix-it bill, but it shows “you have to slow down and look at these things” before making sweeping changes without public input.

The Property Committee meets at 1 pm on Feb. 1. 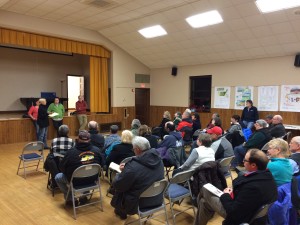 The design session in Baileys Harbor. Photo by Ryan Heise

Town of Baileys Harbor: The town held a session on Jan. 21 to look again at the ideas that were generated by the UW Extension-organized design team that spent a weekend in early November helping to create a vision for the future of the community.

Town of Gibraltar: The town board meets at 7 pm on Feb. 3.

Town of Liberty Grove: The Highway Committee meets at 8 am on Feb. 1. The Plan Commission meets at 7 pm on Feb. 3.

Town of Sturgeon Bay: The town board meets at 7 pm on Feb. 1.

Village of Egg Harbor: The Parks & Public Works Committee meets at 8:30 am on Feb. 3.

Village of Sister Bay: The Parks Committee meets at 2 pm on Feb. 3.