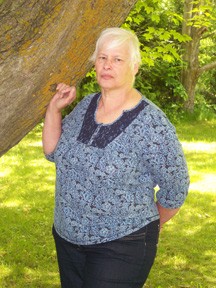 “At this point in my life,” Nancy Rafal said, “the advocacy is more to the front than the writing itself.” She laughed. “I don’t have a writing discipline!”

Rafal is certainly a poet in her own right, her work familiar to those who attend poetry readings or read regional literary publications. However, her advocacy of poetry has encouraged other writers to come closer to realizing their potential both by creating venues for them and by drawing public attention to their work.

A native of Milwaukee, Rafal married and moved to the Chicago area where she worked in the Lombard School District, first as an elementary teacher and later as a library media specialist.

“I just loved being able to read stories to kids, preschool to fifth grade,” she said, “and getting everyone started with computers!”

Upon their retirement in 2000 she and her husband Harry Rafal moved to Door County, purchasing a house in a natural setting not far from Cana Island. The move from a metropolitan area to “not having major bookstores” was an adjustment, “but we got through that phase!” she laughed.

Unfortunately, after they had settled in to their new community, her husband became ill and passed away.

However, she has filled her life with poetry. “When the spirit moves me, I write,” Rafal said. But she tries to be a champion of others, to be “a clearing house for poets in the county, to let them know what’s going on.”

Anyone who is a local poet has probably been added to her email list and regularly receives notification of poetry events, publication opportunities, and contest deadlines. As a part of the leadership of both the Wisconsin Fellowship of Poets (WFOP) and the Wisconsin Writers’ Association (WWA), she is a valuable source of literary information.

Her “red poetry van” is recognizable by the numerous stickers on the back celebrating poetry and related causes. She offers rides to fellow poets wishing to attend events such as the Milwaukee Woodland Patterns Book Center’s poetry marathon, the Appleton Harmony Café’s monthly poets’ reading, or writing conferences.

Perhaps Rafal’s most noteworthy contribution to the poetry community was her part in establishing the Door County Poet Laureate position, officially sanctioned by the county board. The WWA developed a procedure for initiating a poet laureate program, and as Door County is an arts community with a sizeable population of active poets, the establishment of a laureate here seemed fitting.

She brought her plan to former Door County Executive and poet Jude Generaux who embraced the concept and in 2010 the Door County Poet Laureate position became “a done deed,” Rafal said.

The late Norb Blei, one of Door County’s best-known writers, felt that Francis May was a fitting inaugural candidate. The prolific Sturgeon Bay poet was an original voice not only in the area but throughout the state, and was posthumously awarded the position. Sister Bay poet Barbara Larsen served as the first living laureate, and Fish Creek poet Estella Lauter has just begun her two-year tenure.

Rafal’s involvement with the WFOP leadership brought her not only into that organization’s annual calendar project, but introduced her to the man who became not only her friend but a life partner.

“Now we have a garage full of calendars dating back 11 years!” she laughed.

She and Michael Farmer have both appeared frequently in the WFOP Poetry Calendar. She served as editor one year, and at her request, he has for years been business manager of the publication.

The Clearing, Ellison Bay’s Folk School, has been a large part of Rafal’s life since her move to Door County. Coincidentally, the Clearing founder Jens Jensen had lived in a coach house in Lombard many years ago and designed a park there, while his wife had been librarian.

Rafal has taught a number of Winter in The Clearing classes over the years, including poetry writing, and now co-teaches a class in caning chairs. She wrote a short history of the winter Clearing classes for the school.

While Rafal has a great deal of respect for Jens Jensen and his philosophy of living close to nature, Wisconsin poet Lorine Niedecker has probably had the greatest influence on her life. The Fort Atkinson native achieved a national reputation during her career as a reclusive writer.

“I love the surface simplicity of Niedecker’s poetry,” said Rafal, a member of the Friends of Lorine Niedecker, “and the underlying complexity.” The poet has greatly influenced Rafal’s writing, who jokes ironically “My real goal is to get in Norton’s Anthology and be footnoted!”

Rafal was instrumental in planning the centennial celebrations of Niedecker’s birth, events occurring both in Fort Atkinson and Milwaukee. And in a sense she brought the poet’s legacy to Baileys Harbor.

After seeing a Niedecker mural in Fort Atkinson, Rafal found a blank wall on the Nelson’s Shopping Center building and made arrangements for the funding and painting of a mural that commemorated the poet’s 1960s visit to The Ridges Sanctuary with lines from the trip-inspired poem, “Wintergreen Ridge.” The work is scheduled for completion in fall of this year.

Just as the Baileys Harbor mural posts poetry for the public, so does the Poetry Trail at Newport State Park, and once again, Rafal was instrumental in making the concept a reality.

Jack Travis, then president of the Wilderness Society at Newport State Park, approached Rafal about getting poetry into the park. “I knew that Phil Hansotia had been involved with a similar project in Marshfield,” Rafal said. She consulted him and he “did the grunt work. I am the maintenance person, getting the three displays put up each year” on the permanent series of ten weatherproof stands that have been a fixture since 2010, featuring the writings of both student and adult poets.

And she helps to provide a more traditional publishing outlet for poets as well. She is co-editior with Henry Timm of NEW Voices, a literary journal launched in 2011. The publication accepts poetry, fiction, essays, and reviews.

Rafal belongs to Word Women, one of three writing groups in the county. “I’m the ne’er-do-well of the group,” she confessed. “I don’t always do the assignments or come to the meetings.” Nonetheless, the spirit occasionally moves her to write. She has appeared in journals, including Hummingbird, Free Verse, Sheepshead Review and Camel Saloon, and published Slightly Off Q, a chapbook collaboration with fellow poets June Nirschl and Judy Roy. She has won awards in both the fiction and poetry categories of the Hal Grutzmacher contest presented by the Peninsula Pulse, and has read her work at a number of venues, including the Emily Dickinson Poetry Series, Novel Ideas Bookstore, and Untitled Used and Rare Books in Door County.

Poetry is important to her not because it has the answers, but because of the questions it poses. And of her role as an advocate of poets and poetry, she said, “The good part of my life began when I moved to Door County. I just love all the opportunities there are to give back, great for living a long life.”