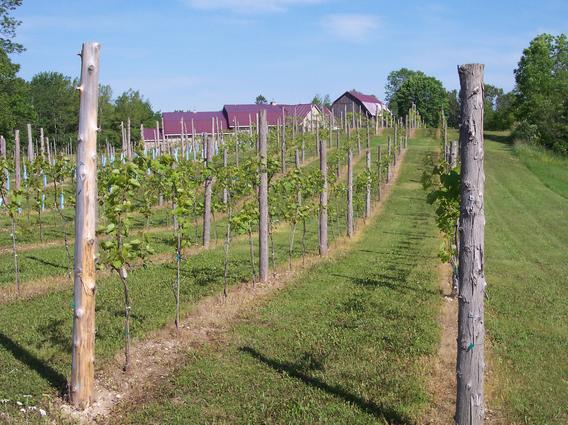 Rows of grapevines on the gently rolling hills might suggest Napa Valley to a visitor sitting on the terrace of the Simon Creek Winery. But these grapes thrive at the center of the Door Peninsula, not far from Carlsville.

Owner Tim Lawrie might look familiar to you, perhaps because he has appeared on television. A retired Army Infantry Airborne Colonel who had volunteered for two combat tours in Vietnam and received both the Silver Star and Purple Heart, Lawrie was asked by his friend the late Tim Russert to serve as a military analyst for NBC and MSNBC after the September 11 attack. He also consulted for CNN and the Canadian Broadcast Company. 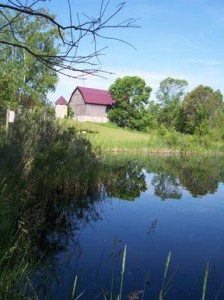 After working as a partner in the Wing Group, a company that built electric power projects around the world, Lawrie retired again and began yet another career as a vintner.

Lawrie was raised in Door County, graduating from Sturgeon Bay High School, and when twelve years ago his daughter Heather, in real estate sales, told him that “the most beautiful place in Door County is for sale,” he bought the 120 acres sight unseen.

“The whole family fell in love with the place,” Lawrie said. Knowing that if he was going to keep the land he “had to do something with it,” he traveled from Houston on weekends to plant the first of the grapes that would become the Simon Creek Vineyard, which opened for business in 2003.

The vineyard and winery takes its name from the Simon family who owned the farm until the 1960s and from the creek that fills the pond “dug by hand by Chris Simon in the 1920s,” Lawrie said.

When the Simons had a reunion at the winery, Chris Simon’s daughter Martha Simon Brauer told Lawrie the family story of Al Capone trying to persuade her father to sell him the farm. Simon, an “untouchable,” refused to be intimidated, inspiring the name of one of the winery’s most popular vintages, “Untouchable Red,” an American Ruby Cabernet wine.

Lawrie’s decision to create a vineyard in Door County was well considered. Among his accomplishments, he has achieved a BS in economics, an MBA, and an understanding of the marketplace.

He prepared for the venture by visiting vineyards and wineries and taking a seminar at Wineries Unlimited, a trade show and conference. The week of classes covered every facet of winemaking, from the planting and care of grapes to the production and marketing of wine.

“I got just enough knowledge to be dangerous!” he joked.

Lawrie continued, “That’s where I got my education, but I know that in the business world you have to pick good people to work with you.”

Lawrie chose his son-in-law Lance Nelson, (a native of Door County) who has a corporate background in management and marketing, to serve as general manager of the operation. Nelson had been marketing director for Pepsi-Cola in South Carolina before he moved back to Door County with his wife Meredyth to take the position.

At the seminar Lawrie met presenter Tom Payette, who lives in Ripidan, Virginia. For more than fifteen years Payette had worked for large wineries and in 1999 was honored as “Winemaker of the Year” by Vineyard and Winery Management Magazine. He served as a consultant before Lawrie’s winery was built and continues to work with Lawrie and Nelson in the operation.

Traditionally Door County has been known for cherry and apple orchards. However, Lawrie notes that the 45th parallel passing through the county also crosses the wine region of France. France may have a climate tempered by warm ocean currents, but Door County has the buffering effect of the lake and bay.

“The 20 varieties of grapes grown at Simon Creek are mostly French American hybrids from upstate New York,” Lawrie said, “cultivated in an area that has a climate similar to what we have, grapes that have a good hardiness level.”

From a broader marketing perspective, Lawrie views the wine industry as good for the economy of Door County. The wineries on the peninsula, which in the past have relied on grape juice transported from other parts of the country, are now growing grapes. “We call each other complementors rather than competitors,” Lawrie said. “We get along well, and send people to each other’s wineries.”

The larger the wine industry in Door County, the more likely tourists will be to choose the area as a destination, and according to Lawrie, “People who visit wineries spend more money than other tourists.”

From the moment that he had purchased the land, Lawrie knew that he had to do something with it to protect it. If the land is usefully employed as a vineyard, it is less likely in the future to be developed in a way that is neither ecologically balanced nor aesthetically pleasing.

“Grapes do not disrupt the beauty of the scenery,” Lawrie pointed out.

Grapes are a good choice from a practical perspective, too. He finds them hardier, less susceptible to droughts, diseases, and insect pests, as well as more reliable for producing a good crop each year. The maintenance of a vineyard is less labor intensive, too. “A crew of five guys can prune the orchard,” he said.

At this point the Simon Creek Vineyard lacks the maturity to be fully productive. Now about 5 percent of the grape juice used in winemaking is harvested from the estate; the remainder arrives in 5,500 gallon tankers from California, New York State, Washington, and Oregon.

“About 99 percent of the wine made in the United States is from grapes that are not estate grown,” Lawrie said. But it is his goal to have at least one-third of the juice used in wine production pressed from his own grapes. With 30 acres of vines under cultivation, Simon Creek is the largest vineyard in the state.

Lawrie takes a great deal of pride in the wine that he is producing. All of his winemaking equipment was imported from Italy, making his “the most modern winery in Wisconsin.”

In addition to a wine lab for quality control and new product development, he has 26,000 gallons of stainless steel storage and fermentation tanks, and a bottling line capable of finishing 25 bottles per minute. Only a dozen days are required to bottle 12,000 cases.

Presently Simon Creek offers 12 wines, including a Cabernet Sauvignon, an American Viognier, an American Chardonnay, and an American Merlot. As a nod to Door County, the winery offers a Peninsula Gold (from Columbard grapes), a Jackson Port, and a Door County Cherry. And of course, the “Untouchable Red” American Ruby Cabernet inspired by the Al Capone legend remains popular. Simon Creek will be adding a new cherry dessert wine, Alexa Cherise.

The pride that Tim Lawrie takes in his wines has been earned, as his Cabernet Sauvignon, Untouchable Red, and Door County Cherry have all received double gold medals. This award, he explained, is given after a panel of 15 – 20 judges all select the same wine as best from as many as 3,000 entries.

During the five years that Simon Creek has been in business, Lawrie said, the winery has been awarded about 170 medals.

Simon Creek Winery offers a tasting room and a retail area that includes a gift shop and a farm market. Most Saturday and Sunday afternoons during the summer, a guitarist/vocalist performs without charge on the terrace.

The Simon Creek Web site, http://www.simoncreekwines.com, offers wines and gift baskets for sale, along with the music schedule, general information, and, for those who can’t get their Napa Valley fix by visiting Simon Creek as often as they’d like, photographs.