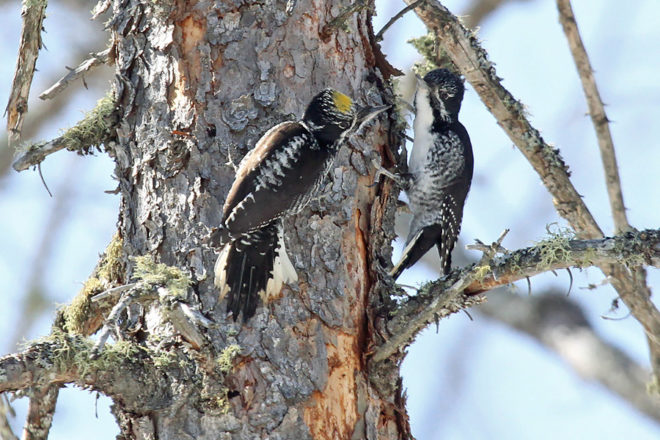 A pair of American three-toed woodpeckers seen in Bayfield County in 2018. The species has only been photographically documented twice in Wisconsin since 1986. Photo by Ryan Brady.

Four bird species rarely if ever confirmed as breeding in Wisconsin were sighted but not confirmed in 2018, tantalizing near-misses among the most notable results from the fourth season of a comprehensive bird survey.

“2018 was a year with a lot of exciting sightings, but ultimately, near-misses,” said Ryan Brady, Department of Natural Resources conservation biologist and science coordinator for the survey, known as Wisconsin Breeding Bird Atlas II. “So check barns for barn owls, and keep an eye out for these other species to see if we can claim them as Wisconsin breeding birds in our final year of data collection.”

The four species sighted but not confirmed as breeding included a pair of eared grebes in Columbia County and a yellow-crowned night heron in Jefferson County. The most talked about finds were a pair of American three-toed woodpeckers in Bayfield County and several barn owls found in southwestern Wisconsin. 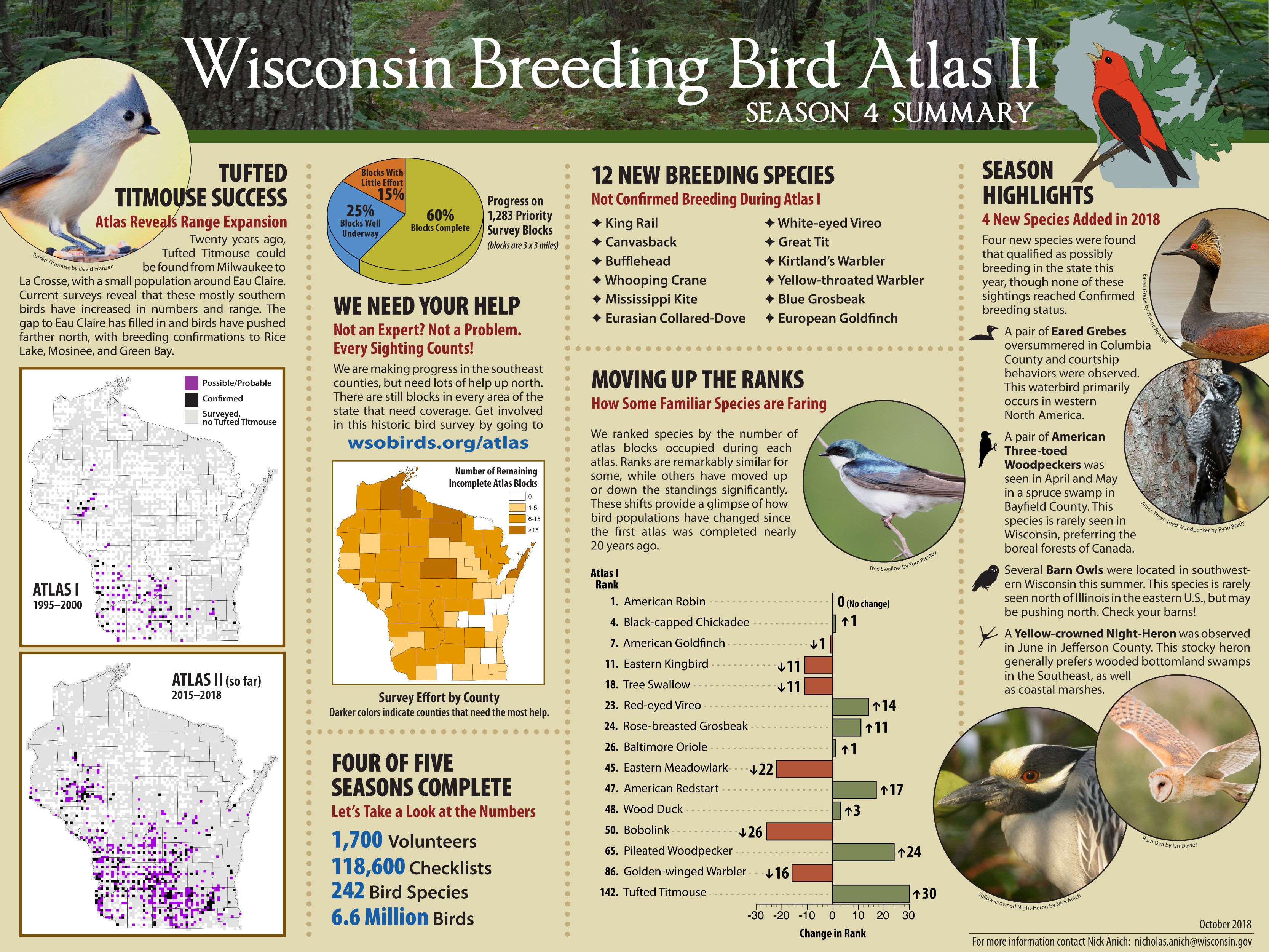 American three-toed woodpeckers had been photographically documented only twice in Wisconsin since 1986 and never documented breeding here. The bird, named for having three instead of four toes like most woodpeckers, prefers boreal forests in Canada. Unfortunately, this year’s Bayfield County pair departed in May before any further evidence of nesting was found.

Barn owl populations have rebounded somewhat in more favored breeding areas of Iowa and Illinois, Brady said. “With sightings in Wisconsin slightly on the rise, it might not be long before they attempt to breed again in our southern or western grasslands.”

The five-year atlas effort aims to document every bird species breeding in Wisconsin, and where and when breeding occurs, to help guide conservation efforts. “Preliminary data is showing some species groups like grassland and aerial insectivores on the decline compared to the first survey, while other species, particularly those that may be benefiting from more forest cover, on the increase,” said Nick Anich, Atlas survey coordinator for DNR.

The data collection portion of the survey is slated to wrap up in 2019 after the summer breeding season ends and coordinators are still looking for more volunteers.

“While 85 percent of priority survey areas are completed or well underway, there are still more than 500 survey blocks in which we need more help! Volunteer to survey one of these areas, and/or report birds nesting or engaging in other breeding behaviors,” Anich said. “The biggest remaining gaps are in northern and western Wisconsin but there are still opportunities in every area of the state to help.”

The best way to get involved is visit the project website, wsobirds.org/atlas, and contact the county coordinator for your county.

Bill Mueller, director of the Western Great Lakes Bird and Bat Observatory, which is sponsoring the survey along with DNR, Wisconsin Society for Ornithology and the Wisconsin Bird Conservation Initiative, said it’s easy to participate and people don’t have to be an expert birder to help.

“We’re constantly hearing from people how rewarding atlasing is, and we welcome participants of all ability levels.”