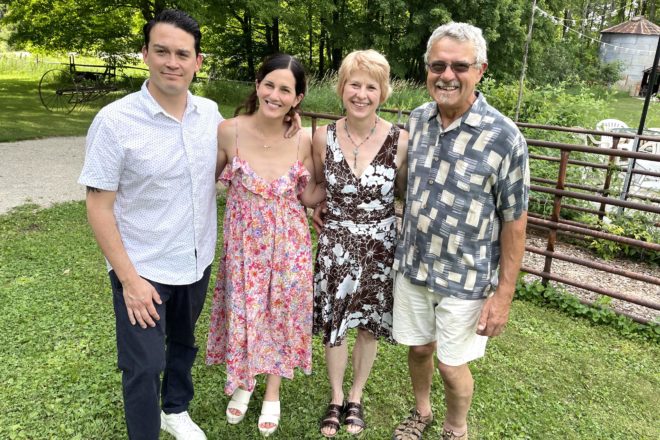 (From left) New owners Matt and Joslyn Villalpandos with Jillaine and Andy Seefeldt, who have owned Woodwalk since 2015.

The Woodwalk Gallery and event space has new owners: Matt and Joslyn Villalpando, who realized a dream at the end of June that had been seven years in the making.

The Villalpandos were married at Woodwalk in September 2015, planting the seeds for the Chicago couple to make a permanent move to the peninsula, where Matt was raised and graduated from Gibraltar High School. As their dream percolated, Matt grew his career in real estate, and Joslyn – an art teacher in the Chicago Public Schools for 12 years – grew a business teaching pop-up craft and art workshops at restaurants and venues throughout the city.

Joslyn now brings those workshops to the gallery, where she and Matt plan to build on the success of Jillaine and Andy Seefeldt, who have operated the space since 2015. In that time they have doubled the number of artists represented in the gallery and added a variety of events such as chef-driven dinners and artist demonstration days. The Seefeldts are staying in Door County and will be on hand throughout the season to work with the new owners.

The Villalpandos will live on the property with their two daughters, Sylvie (1) and Josephine (4).

Up next at Woodwalk Gallery (woodwalkgallery.com), 6746 Cty G in Egg Harbor, are Wednesday workshops in watercolor, macramé and embroidery; Midsummer’s Music concerts on July 24 and 31; a July 29 artist demonstration day; and three nights of Buckets of Rain concerts in August.