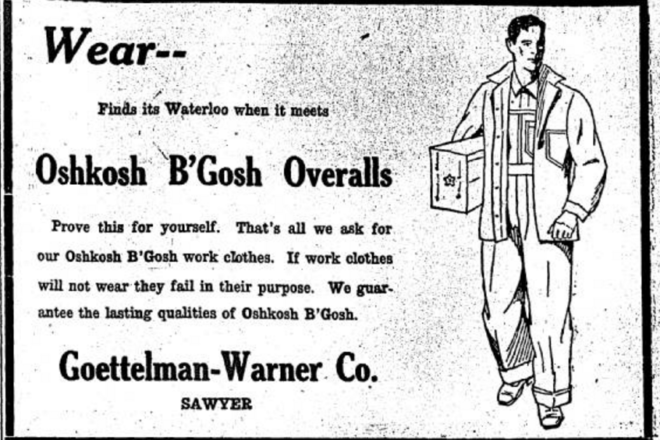 The great need of this section about now is a man with brains enough to construct an Almanac with Spring placed where it belongs. Snow falling 12 inches deep the 20th day of April, convicts all of our Almanacs of libel.

Our druggists last Monday inaugurated a new feature in this city by employing young lady clerks as assistants, Miss Jessie Dreutzer will hereafter hand out the world renowned “Norwegian Cough Syrup” in Hutchinson’s drug store, while her friend and school chum Miss Lizzie Weston, of Necedah, Juneau county, will perform like services at the store of Hamilton & Co.

OUR FIRST TRAIN OF CARS.

On Tuesday morning the first railroad train ran into the city of Sturgeon Bay, and while we have been waiting for years to welcome our first train this event didn’t exactly seem to fill the bill. This is probably due to the fact that instead of coming overland the cars were on board the car-ferry steamer Ann Arbor No. 2, bound from Frankfort, Mich., to Menominee. It was a railroad train, anyway, if it was on board a steamboat, and when it became known around town that the big craft was coming down the bay an immense crowd of our people rushed down to the bridge to take a look both at the cars and at the ferry steamer which is certainly a curiosity.

Mrs. Harry Walker was among the Sturgeon Bay people who had relatives in California at the time of the terrible earthquake last week. Her parents were at Santa Rosa, which place suffered from the shock. The house in which they were residing was destroyed, and when the letter was written to Mrs. Walker, they were camping out in the front yard.

Buys Auto Hearse – H. J. Hahn, the wide-awake and progressive undertaker on this side of the bay has purchased an auto hearse. The horsedrawn hearse has become a thing of the past year, all funerals being attended by people in autos. This kind of a hearse makes it possible to cover a great distance in a short time, which is especially advantageous where a couple of funerals are held on the same day.

According to an announcement published in a Chicago paper, Chambers Island is to be divided into subdivisions, platted and placed on the market in lots. An advertisement to this effect is offering these parcels of land to the public.

The ad calls attention to the wonderful opportunity to acquire a site for a summer home. The island is described in detail and is no exaggeration. Chambers Island is the largest island on Green bay. It is truly a wonderful place. A new dock has been put in during the past winter to accommodate the Goodrich line steamers.

The owners of the island, a corporation organized a couple years ago, expect to be able to dispose of every piece of land on the island in due course of time, and not so very long either.

MOTORISTS ARE AGAIN CARELESS ABOUT LIGHTS

Motorists are becoming careless about their car headlights again, County Traffic Officer Paul Roble warns, and unless the offending drivers see to it that lights are in proper condition and dimmed when approaching cars, arrests will have to be made.

One-eyed cars are again becoming prevalent, and tail lights are conspicuous by their absence.

With the coming of heavier traffic on the county highways, better lights on cars will be demanded, in the interest of better safety.