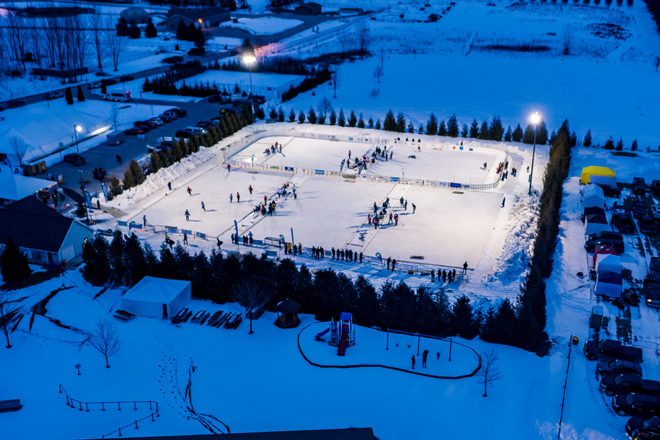 Door County Pond Hockey Tournament under the lights at the Teresa K Hilander Community Ice RInk in Sister Bay. Photo by Brett Kosmider. Follow him on Instagram at @brettkosmider

Warm temperatures the week before the event forced organizers to move the tournament off Kangaroo Lake and onto solid land at the Sister Bay Sports Complex. Crews worked through the night all week to flood the rinks, build boards and prep the grounds, with final preparations completed just minutes before the first pucks dropped.

“It came down to the wire, but the crews worked incredibly hard on little sleep to pull it all together,” said organizer Brian Fitzgerald.

Asa Kastner, Andrew Iding, Cole Vanderleest, Rick Chomeau, Cody Bolton, Sawyer Johnson, Eric Scheller, Cal Lautenbach, Ben Fitzgerald, Will Anderson, Jackson Krauss and Chris Miller all pulled shifts to flood the rinks, which had almost no ice on them as of the morning of Feb. 4. Fitzgerald said the Village of Sister Bay, Sister Bay Advancement Association, Baileys Harbor Community Association and the crew from the Sister Bay Parks Department were all instrumental in making the last-second change a success.

Fifty teams competed in eight divisions for the Stanley Thermos trophy, with play continuing into the night under the lights. Most teams traveled from Chicago, Milwaukee, Madison and the Fox Valley, but some teams also included players who had flown in from Seattle and New York for the event.

Open B: The Team