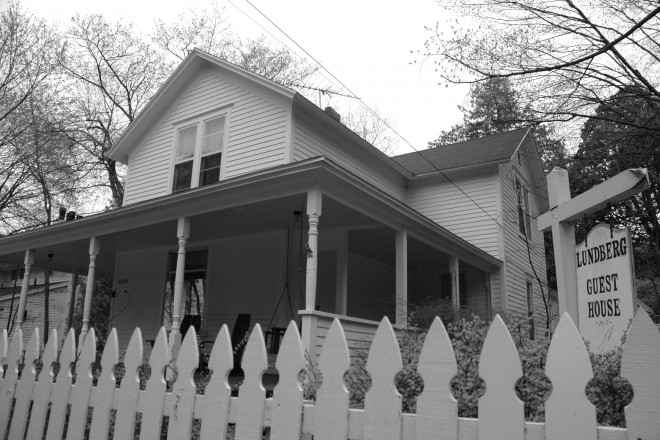 It hits us when we’re home alone and we shut off the TV, revealing the eerie silence of an empty house. Sometimes you feel it when you drag the garbage to the curb at night, or for the rurally inclined, to the burning barrel in the back yard. The feeling, the sense, that someone else – something else – is there. The hair stands up on your neck, the heart skips a beat, the body involuntarily freezes for just a moment. Then a tough façade kicks in with the denial.

“It’s not real,” you tell yourself. “There’s nothing there. Keep walking, don’t look back. Act like you’re not scared and it will go away. Just look straight ahead.” As if there was an option, as your neck is frozen in place, stuck like a locked steering wheel. If you don’t turn and look, you think, it’ll go away.

Closer to the door, you feel yourself on the edge of escape. Just make it inside the house, or into your bedroom, whatever strikes you as a safe zone in that moment, and lock the door. You measure your steps as you do only in moments of panic. Four quick steps you figure, and you dart onto the front porch, lunging for the doorknob with the final stride, timing it perfectly. You’ve barely landed and the knob is turned, the door is open, and you’re inside. Safe. Relieved.

Then you try to play it cool walking in, trying to catch your breath without looking like you’re catching your breath. Try to look at ease walking into the living room where your roommates, or your parents or your children sit, eyebrows raised at you.

Because nobody believes in ghosts. Right? If you do, you’re a kook. Crazy. Nuts. Right?

Despite this stigma and the efforts of most of us to deny the paranormal, it seems every area has its own ghost stories and legends. Door County is no different. The isolation of the peninsula can lead the mind to wander, particularly in the long nights of the Wisconsin winter. Add to that the treacherous waters – never far from sight or mind – of Lake Michigan and Death’s Door that have claimed so many vessels, and you have a geography ripe for tales of the supernatural.

Perhaps these are the simple roots of the area’s ghostly lore, but there are those who are adamant there is more than imagination at play. For one Sturgeon Bay couple, the ghost in their midst is so real, they’ve made him a part of the family.

Their home sits about a block off the canal, its aging, worn shingles lending a hue of darkness that the beige of the first floor struggles to offset. The curtains of the second-story windows sit parted, giving the expectation that a face lost in purgatory might appear at any moment to stare you down from above.

If you dial the home of the couple (who we’ll call Jim and Sue) and nobody’s home, you’ll get an unexpected answering machine greeting telling you that “Sue, Jim and Black Bear aren’t home right now.” Realize, Black Bear is not a pet, but the name the couple has bestowed upon the ghost they say haunts their home on Eighth Avenue.

They’ve had the home for almost 12 years, having moved in after relocating from Los Angeles in 1994. The couple moved to the peninsula to escape the absurd pace of Southern California, only to find a new sort of absurdity in their new home.

Shortly after moving in, Sue was heading down to the cellar when an unexpected visitor startled her. “I opened the door and saw him coming up from the basement,” she remembers. “He looked like a [Native American] from way back in the 1700s. I screamed and slammed the door shut, then called Jim over. When he came I whispered to him ‘there’s someone in the basement.’ He looked so real I thought I’d just seen a real person.”

Jim told her to open the door and they’d see who it was, but when she did, the man she had seen wearing a black cloak on the steps was gone. “I’d never seen a ghost before, so I didn’t know what to do,” Sue said. “People tell me if you scream you scare them away, that you just have to talk to them. I think I just scared him off.”

Since that day, the couple has felt Black Bear’s presence many times, but Joe said he has never seen the ghost himself. “I drink, she sees the ghost,” he says.

He has had his experiences, however, with odd noises and little incidents. “I’ll be alone in the living room watching CNN when something taps me on the head,” he says. “I’ll think it’s Sue, but when I look nobody’s there.”

They say guests have been unnerved in the home as well. A sister of Jim’s refuses to stay in the home when she visits, and more than one visitor has told them they felt something odd upon venturing into their basement.

Jim and Sue trace the ghost to a doctor who lived in the home years ago. They said a Native American was found on the frozen canal one winter night and the doctor performed the autopsy. When he came home, they think he brought theNative American’s spirit with him.

Sue said she’s heard rumors from neighbors that the house is haunted, but her most startling confirmation came during a call to the family who lived in the home before them. “The lady got really upset when I asked her about a ghost,” Sue says. “She sounded defensive and said, ‘No, there’s no such thing in that house!’”

But then Sue heard something in the background. “I heard her son yell, ‘I told you Mom, I told you I saw it!’” she said. “That’s really got to make you wonder, now doesn’t it?”

The home’s staircase begins with a wide, grand berth in the living room, but narrows with each landing. A heavy, distinct creaking emanates from each step – creaking the couple hears from Black Bear as he makes his way in the night from basement to attic, where the boy said he saw the ghost.

Sue and Jim have come to accept their housemate, despite the occasional unfurling of toilet paper, taps on the head and intrusions into showers. They’ve learned to simply talk to him to keep him in his place. “When we hear him we just say, ‘Black Bear, go back down in the cellar,’” Sue says. “Then the noise usually stops.”

Unfortunately, the legend and the imposing look of the home have had an effect on one group of visitors. “We used to have a lot of trick-or-treaters,” Jim says. “But not that many kids come to the door any more.”

Sue and Jim’s story is not an isolated Door County tale.

Many stories have been spurred by the historic shipwrecks in the waters of Green Bay and Lake Michigan. Some residents will tell the tale of the Griffin, the famous lost ship of explorer Robert de La Salle, which legend claims still sails in the churning waters of a Lake Michigan gale, still seeking its destination over three centuries after it disappeared. Others believe the souls of those lost in the sinking of the Eric L. Hackley in 1903 haunt the village of Fish Creek.

The ghosts of the Hackley will be featured in a new tour offered by the Door County Trolley for the summer of 2006. Trolley operator A.J. Frank will offer a family-friendly tour of some of Fish Creek’s notorious hauntings. Among the stops will be an overlook of the site where the Hackley went down, taking 11 prominent Fish Creek citizens to the depths of the lake. Frank said he got the idea while on a similar tour in Savannah, Georgia.

“That, and all the stories I’ve heard from people on our other tours over the years really sparked my interest in the ghost lore up here,” Frank said. “Whether or not you believe in ghosts or haunted houses, there are some great stories to be told.”

Frank also plans stops at the White Gull Inn’s Lundberg House and Thorpe House Inn, both long-rumored to be victimized by tortured souls. Hauntings are often said to stem from people taken from this earth before their time, victims of untimely accidents or murder. The latter is the claim of a venerable Egg Harbor establishment.

It may be that folks who imbibe more frequently are just prone to hearing odd noises, seeing things, or exaggerating reality, but whatever the origins of the stories, it’s apparent that liquid spirits tend to beget other-worldly spirits.

Door County’s old, historic taverns are ripe for fermenting tales of hauntings. One of those is the Shipwrecked Brew Pub in Egg Harbor, a building more than a century old, thought to be haunted by the ghost of Al Capone’s illegitimate son, Jason.

It has long been said that the notorious Chicago gangster hid out in Door County when the heat was on, and the story goes that Jason was found hung in the attic of the building, killed for fear he would inform the police. Many have claimed to see and hear his ghost over the years, but one particular sighting has proven most indelible.

Shipwrecked general manager Edward Downham explained the legend. “Apparently there was a phone call to the police about a child on the roof,” Downham said. “A man coming down the hill from a distance saw what looked like a child on the roof and called the police. From what I understand, it is a fact that the police were called, but when the firefighters came to check there was nothing on the roof.”

The expansive pub’s ominous attic window lords over the center of the village, though thankfully for the easily spooked, an owner once had the presence of mind to paint the domineering building a less officious baby blue.

Downham has been the general manager at Shipwrecked for over six years, and though the restaurant features the ghost stories on its menus, he remains dubious.

“I’ve personally lived in the attic for some time now, and I haven’t seen or heard anything,” he said. “I’m not really a believer in ghosts and I’m not really into that kind of stuff, but if I was I’d probably be freaking out pretty bad up there.”

Such disclaimers haven’t stopped the stories from spreading, and the believers still surface from time to time. Downham said a man even stopped by the restaurant recently claiming to be a paranormal investigator.

“He said he had formal training and everything,” Downham said. “So, apparently some people really believe there’s something to it.”

They believe our picturesque peninsula, a retreat for so many from the chaos of life in the outside world, is home to buildings with a different life of their own. That in many moments, we’re among more than friends.