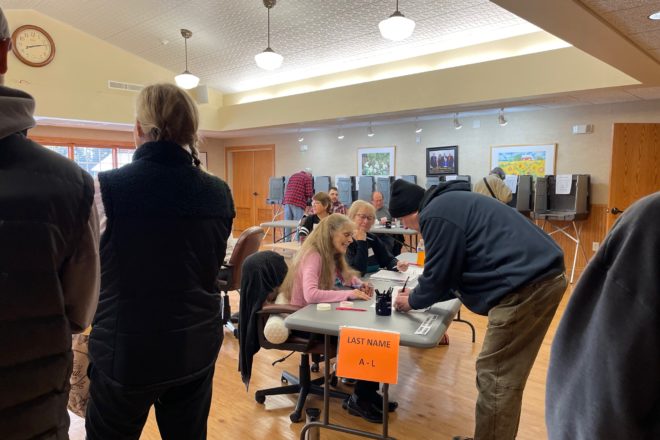 Early-morning voters in the Town of Sevastopol cast their ballots Nov. 8. The town’s residents would cast 1,846 votes before the polls closed at 8 pm out of the 17,441 total in Door County. Photo by D.A. Fitzgerald.

The 17,441 Door County residents who voted in the Nov. 8 election cast ballots that aligned with statewide results.

On the local front, the Southern Door School District made a successful bid for more money for operations and to make physical changes to the campus, including the construction of a new sports training facility.

Specifically, the voters authorized the district to exceed revenue limits by $975,000 per year, for three years, for operational expenses beginning with the 2023-24 school year.

Voters also said yes to borrowing $14.9 million to make campuswide capital improvements, with the biggest of those being the construction of a 25,000-square-foot indoor sports training facility.

Southern Door School District Superintendent Chris Peterson said he felt “overwhelmed and very, very grateful” about the vote outcomes, and he thanked the community for the support it showed in passing the two referendum questions.

The district is made up of part or all of the towns of Brussels, Clay Banks, Forestville, Gardner, Nasewaupee, Sturgeon Bay and Union, as well as the Village of Forestville and a part of the City of Sturgeon Bay.

“This is such a good thing for our kids and the community,” Peterson said.

Although the win was a big one, voters passed the sports facility by a far slimmer margin than they did the additional operational dollars. Those outcomes reflected the fundamental difference between the two, Peterson said, which is something he’s been saying all along: The operational spending was a need, while the sports facility was “definitely a want.”

He believes that want, however, will “help attract new families to Southern Door.”

The only other local questions put to Door County voters were in the Town of Nasewaupee, where voters said they wanted appointed rather than elected clerk and treasurer positions. The vote was 601 to 509 for the clerk position, and 595 to 512 for the treasurer.

Nasewaupee Town Board Chair Steve Sullivan said he didn’t have a preference either way, but he was surprised by the outcome.

“It was done [with the same referendum questions] about 10-15 years ago, and voters pretty definitely defeated it then,” Sullivan said.

Although he can’t say what drove the change in the voters’ decisions this time, he thought it was probably for the better.

“Our clerk and treasurer are both retiring,” he said about current clerk Jill Lau – who also serves as the Door County Clerk – and current treasurer Carol Russell. “We were concerned that no one would run, and we’d get someone without qualifications.”

Sullivan encouraged applicants to apply for the jobs, for which town residency will no longer be required with the positions switching from elected to appointed.

Lau said 4,834 absentee ballots were issued in the county for this election, versus 11,551 absentee ballots issued for the November 2020 presidential election during the global pandemic, and 3,542 for the 2018 midterm elections.

During the 2020 presidential election, which took place at the height of the global pandemic, 20,208 Door County voters cast ballots.

Unofficial election results in Door County mirrored the statewide trend with the candidates who tallied the most votes.

• Democratic Gov. Tony Evers, who has held that office for the past four years, won the Door County vote to Republican challenger Tim Michels, 8,983 to 8,145. Statewide result: Evers.

• Democratic incumbent Doug La Follette, who’s been the secretary of state for the past 40 years and also held the office for four years during the late 1970s, edged Republican challenger Amy Loudenbeck, 8,450 to 8,187. Statewide result: La Follette leads by about 7,000 votes.

• U.S. Rep. Mike Gallagher, who did not have a Democratic challenger, received 10,270 votes, versus the 3,336 given to Independent candidate Paul Boucher and Libertarian candidate Jacob VandenPlas’ 1,790. District result: Mike Gallagher.

To see the complete Door County results, go to co.door.wi.gov/253/Election-Results and click on Statement of Votes Cast.