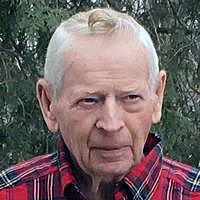 Arthur Ficks, 81, of Bailey Harbor, died May 26, 2017 at Door County Memorial Hospital. He was born Sept 8, 1935 in Sturgeon Bay to the late Charles Ficks and Alfreda (Johns) Frost.

He worked for Parent Construction as a crane operator, loved working outside and around the farm. He worked side by side with his wife Kathleen performing all the necessary tasks to manage a farm. Art loved to hunt and enjoyed the wildlife. Art had a saw mill and was very creative; he sawed his own lumber and made outdoor furniture.

He married the love of his life Kathleen Christenson on December 11, 1966; from then on they were inseparable. Art was a loving caregiver for his wife while she battled health issues for 12+ years. She preceded him in death on January 31, 2017.

He was proceed in death by his wife Kathleen, his father Charles Ficks, and his mother Alfreda (Johns) Frost and his sister Hazel (Charles Sr) Steinke and their daughter Terri Bruechert, his sister Carol Ficks, his sister Dawn Mayrack and her son Troy Mayrack , a nephew Steve Peterson.

Thank you to all the special friends in Arts life, which made Arts life memorable in many special ways and a big thank you to Door County Hospital, the oncology department and Unity Hospice.

The funeral service will be on Friday June 2, 2013 at the Ephraim Moravian Church. Visitation will be held from Noon until time of service at 1:00 P.M. at the Church.

Online Registration and Condolences may be offered at wwwcaspersonfuneralhome.com.