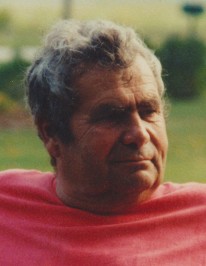 Cecil Surfus Jr., 87, of Forestville died at the home he shared with his best friend and care giver, Donna Henderson.

He was born in Sawyer (now the west side of Sturgeon Bay), the son of Cecil Frank Surfus and Clarinda Freida Lily (Dix) Surfus. After attending school in Sturgeon Bay, he enlisted to serve his country with the United States Army, entering into active duty on November 30, 1948. Cecil served during the Korean War and was honorably discharged from the Army on May 9, 1952.

He married Mary Lou Kasbohm on October 10, 1953, at St. Joseph Catholic Church in Sturgeon Bay. They shared over 20 years of marriage and had seven children.

Cecil was self-employed as a mason and was well known in Door County for his masonry work. He helped with the construction of Peterson Pool in Sturgeon Bay in addition to his other projects. During the winter months, Cecil worked in the shipyards as a pipefitter for Peterson Builders Incorporated (PBI) and Christy Corporation (later Bay Shipbuilding Company).

He met Donna Henderson in 1974, and they enjoyed over 44 years of friendship.

Cecil loved the outdoors, and when his health was better, he spent a lot of time fishing, hunting and trapping. Most recently, he spent his summers growing and selling tomatoes at his roadside stand on Clay Banks Road in the city of Sturgeon Bay. Cecil also enjoyed making wine from his mulberries, raspberries, apples and even corn, just to name a few of the flavors. He also liked socializing with friends at the Greystone Castle in Sturgeon Bay.

A service of remembrance will be held at 3 pm on Saturday, Aug. 10, at Huehns Funeral Home in Sturgeon Bay. Military honors by the United States Army and the George W. Goetz American Legion Post 372 of Forestville will follow the service at the funeral home.

Visitation for family and friends will be held at Huehns Funeral Home on Aug. 10, 1-3 pm.

“Our family would like to extend a special thanks to the staff of Unity Hospice for the care given to Cecil.”

Expressions of sympathy, memories and photos of Cecil can be shared through his tribute page at huehnsfuneralhome.com.