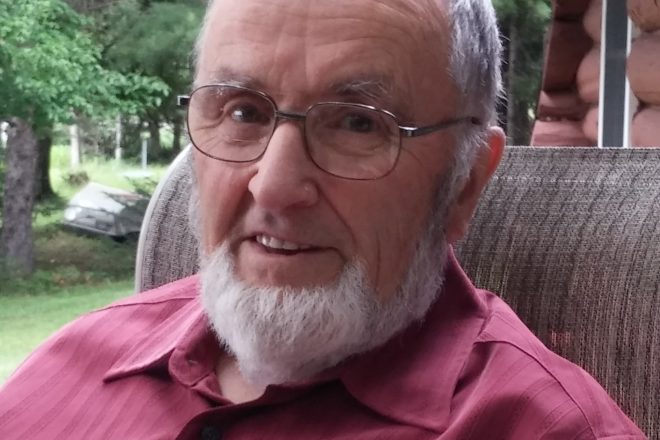 Doug was a 1956 graduate of Mellen High School. In school, he loved industrial arts class and played basketball as a guard. He often joked about his tendency to skip classes until the principal re did the school schedule so that shop class was at the end of the day, forcing him to stay all day long. During his high school years, he worked alongside his father, Vernon Meredith, in the family business, Mellen Mercantile. Doug spoke often of that experience and how it would later shape him as a businessman.

Upon graduation, Doug briefly attended business school in Minneapolis, returning every weekend to help his dad with the store. But school was not his thing, and he eventually enlisted in the US Army and served his country until his father’s health deteriorated and he was called home. Doug served from 1956- 1958 and was stationed in Chicago.

Upon returning from service, he began dating “Pat” Geshel. Their first date came about as a dare from one of Doug’s friends. But as unlikely as the two may have seemed, they fell in love and were married in Iron Belt, WI, and September 1, 1962.

The newlyweds moved to Chicago and later to Menomonee Falls, WI where they started their family of four children. Doug had ambitions of having his own business, so in 1974 he moved the family to Sturgeon Bay, WI, where he took over Jolin’s Drugs, which became Bay Pharmacy. The business grew into a second store on the west side of town and later a third location in a new shopping mall. Though Doug had no formal business training, he excelled as a retailer.  His life journey and talent caught the attention of the editors of Inc. Magazine, and in 1997 he was featured in a multi-page story of an entrepreneur who triumphed over the growing rise of ‘Big Box’ facilities like Wal- Mart.

Doug and Pat eventually retired from the pharmacy business in 1998. They moved to property originally owned and built by Pat’s family on Lake Galilee, east of Mellen, where Doug lived until his passing.

Doug was an active member in the United Church of Christ in Mellen, serving on several boards and singing in the Peace Community Choir. Doug loved to go fishing in Canada with his son, sons-in-law, grandsons and family friend, John Jones. He was a superbly gifted woodworker and made countless beautiful pieces for family and friends, including heirloom cradles for his grandchildren.  He was also a master with the barbecue grill. Doug had a great sense of humor and fun; he was exceptionally kind and self-effacing. He could talk effortlessly with anyone, but he was always interested in other people. Doug was instantly likable, and his joyful nature made him a great husband, friend, and father. Doug loved food, people, family, his wife, and his home.

He is survived by his wife of 59 years, Sharon “Pat” Meredith, and four children: Kelly Meredith (Jim Babler) of Butternut WI, Kate Meredith (Chris Danou) of Williams Bay WI, John (Theresa Kay) Meredith of Forestville, WI, and Jill (Todd) Maus, of Suamico WI, and seven grandchildren: Mikayla, Grant and Madeline Maus; Orion and Rowan Danou, and Zachary and Cole Meredith. He was preceded in death by his parents, Vernon and Winifred Meredith, and his sister Marjorie Woller.

A celebration of life will be held at a later date. Mountain Funeral Home and Cremation Services of Ashland and Mellen, WI are assisting the family.

Doug’s family thanks the staff at Memorial Medical Center for the amazing compassion and care shown to him in his final days.