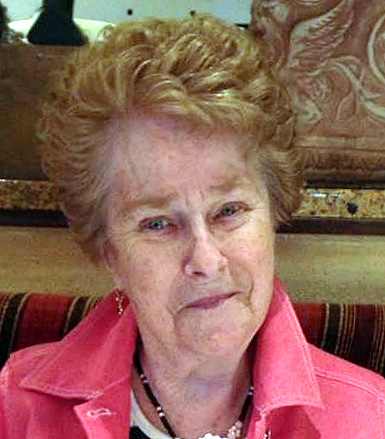 Nina Mae Evenson, age 82, of Milwaukee and formerly Sturgeon Bay, was blessed with a “lucky ladybug life” as she referred to it.  On March 1st, 2016 she joined her husband Robert in eternal life.

She was born April 30, 1933, in Sturgeon Bay, the daughter of Cleve and Emaline (Peterson) Schumacher. Nina graduated from Kewaunee High School in 1951.

She was united in marriage to Robert Edward Evenson in Algoma on June 25, 1955. They enjoyed over 52 years of marriage; raised a family and traveled in their retirement years. Bob preceded Nina in death on October 16, 2007.

Nina worked at the Navy Dept. in Sturgeon Bay and Milwaukee. She was a member of Sons of Norway where she enjoyed serving Torsk dinners and wearing her Norwegian bunad. She also volunteered at local schools, church and at WE Share in Milwaukee where she was a knitter for the mitten club.

Nina was preceded in death by her parents, husband, sister, Lois Soule and her first rescue dog, Gunnar.

A funeral service honoring Nina’s life will be held at 2:00 p.m. on Saturday, March 5, 2016 at Huehns Funeral Home in Sturgeon Bay with Pastor David Leistra officiating.  Nina will be laid to rest beside her husband, Bob, in Schumacher Cemetery.

Visitation for family and friends will be held at Huehns Funeral Home on Saturday,  from 11:00 a.m. until the time of service at 2:00 p.m.

Memorials may be given in Nina’s memory to Sons of Norway-Fosselyngen Lodge #82 in Milwaukee.