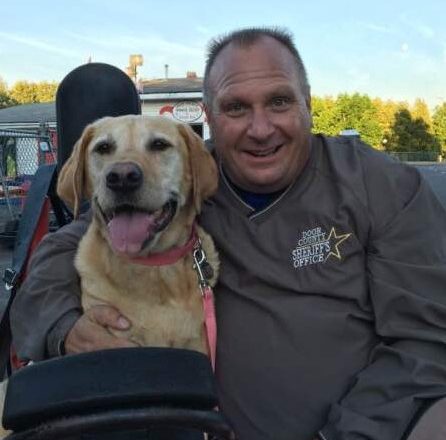 He was born December 19, 1965, in Algoma, the son of the late William and Dorothy (Ehlers) Fuerst. Tim graduated from Sevastopol High School in 1984 where he was a standout pitcher for the baseball team. To this day, Tim holds the 2nd Place Class C record for most strikeouts in WIAA tournament play against Cumberland in 1984. Following high school, Tim attended the University of Wisconsin-Stout, where he studied Sociology and Early Childhood Development before transferring to Chippewa Valley Tech to pursue certification in Police Sciences. After graduation, he worked in security briefly before a career that began with the Dunn’s County Sheriff’s Department and then the Door County Sheriff’s Office. His career with the Door County Sheriff’s Office spanned 29 ½ years.

Tim loved serving the Door County community and protecting all residents and visitors throughout Door County. He was known for his careful enforcement of the law while exercising compassion for everyone he met, as well as for his incredible sense of humor.

He also served as a long-time member of the Door County SWAT team, an officer field trainer, and managed the reserve deputies for years. Tim loved coaching youth sports, particularly baseball at all levels, including Babe Ruth and Legion, gaining many championships with the teams he was involved with. His son, Joe, meant everything to him, and Tim enjoyed coaching Joe through his youth, where they were able to form an inseparable bond. From his father’s example, Joe also followed Tim into a career in law enforcement, serving first in Waukesha County and now for the City of Green Bay.

Tim told everyone his life was complete when he met MaryKay (Teskie) Shumway in 2011 and on September 14, 2013, they married at Shepherd of the Bay Lutheran Church in Ellison Bay.

Preceding Tim in death were his parents, Bill and Dorothy Fuerst; and brother-in-law, Fred Greenwood.

His life will be honored with a funeral service held at 6:00 p.m. on Wednesday, June 9, 2021, at Huehns Funeral Home in Sturgeon Bay with Pastor Ed House officiating. Burial will be in Bayside Cemetery.

Memorials may be made in Timothy Fuerst’s memory to Door County Emergency Responders.

“Thank you to the number of friends and community that have reached out to comfort us these past few days and, with that support, we will get through this tragic loss together. We lost an irreplaceable soul. Tim’s kindness, compassion, quick wit and humor were a beacon to many people throughout his life. Thank you all again for your support.”

Expressions of sympathy, memories, and photos of Tim may be shared with his family through his tribute page at www.huehnsfuneralhome.com.