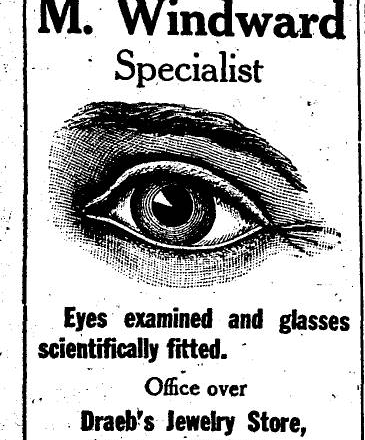 Promoters Talking of Connecting Us With Clipper City by an Interurban Route to Open Rich Country.

The Kewaunee Enterprise is authori­ty for a statement to the effect that a movement is on foot to construct an interurban line from Two Rivers to that city, and eventually to Sturgeon Bay, and states that it is evident that it is more than “newspaper talk” this time.

The promoter of the project is A. C. Lingelbach of Chicago, and in a letter published in that paper he states that he is contemplating the possibility of constructing an interurban railway be­tween the cities of Manitowoc and Stur­geon Bay with a view of making it a freight as well as a passenger line. The company is to be known as the Manitowoc-Sturgeon Bay Traction Co.

When a girl sends a fellow a necktie of three colors—blue, purple and red—with an initial letter of her name on one end, she “means business” now-a-days, because that is the new Leap Year way of “proposing.”

There will be no great building boom in this city next summer, but it is probable that there will be several brick business buildings erected and more dwelling houses than has ever been built heretofore in one season within our city limits.

LIFE IN THE CITY.

We heard a pretty good one from up north the other day. It seems that one of the prominent citizens from up there contemplated making a trip to this city and as a favor one of his friends requested that he order him one of the county newspapers and supplied him with the wherewithal to pay for the same, the man wanting the newspaper being a strong temperance man. Another of the traveler’s friends, who had evidently been gifted with an unquenchable thirst and had not the temperate scruples that the other gentleman possessed, requested that the traveler bring him up a jug of whiskey, furnishing him with the jug and money for the same. When the gentleman arrived in this city he had got the names of bis two friends somewhat mixed and the consequence was that the jug of spirits was sent to the temperance man, while the man with abnormal thirst was sent the newspaper. What the men thought when they received their respective consignments is not stated, but they were no doubt properly adjusted in due course of time.

WASHINGTON HARBOR, Jan. 23.—We have been having a cold snap, the thermometer registering as low as fourteen degrees below zero. The snow is about two feet deep on the level, and there is now no fear of the open winter that was predicted in the early part of the season. The Door and Green Bay are frozen over and fishing on the ice has begun. Several of the fishermen were “skunked” when they first began operations, while others did better, the largest number of trout caught up to the present writing being about thirty.

Up to last Saturday we had not had a mail for a period of two weeks owing to the bad crossing on the Door, but now that the ice is safe the carrier is able to run on schedule time.