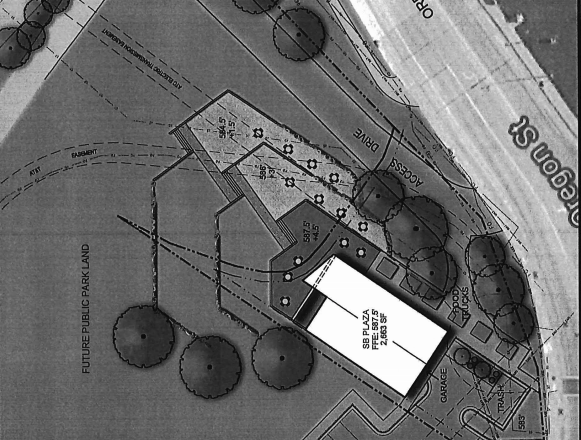 A concept drawing for a city-owned lot on Maple Street near the Oregon Street Bridge. Submitted.

Where Maple Street curves into the Oregon Street bridge, there’s a small, city-owned lot that’s been looking for a development project. Maybe that project has arrived.

The city’s Common Council has granted a 90-day exclusivity agreement to Peter and Jennifer Gentry, owners of One Barrel Brewing Co. in Egg Harbor, to give the couple time to flesh out plans for the site.

“The only harm to the city is time,” said Marty Olejniczek, Sturgeon Bay’s community development director. “And we’ve not seen much of any interest in [the site]. We do think they have the wherewithal to do a nice development.”

A summary of the project described a 5,000-square-foot, two-story building. Half would be used for a community-focused plaza concept, with first-floor concessions and bar-type services, plus a second-floor patio. The other half of the building would house a retail tenant. The development would include bathrooms, spaces for food carts and landscaping for outdoor seating.

City staff recommended several incentives if the project went forward, including TIF funds and possible grant money. One of the incentives was retaining two available Premier Economic Development District liquor licenses to be used for the project. The initial cost of such a license is $30,000.

The Gentrys estimated the development would be worth between $750,000 and $1 million.