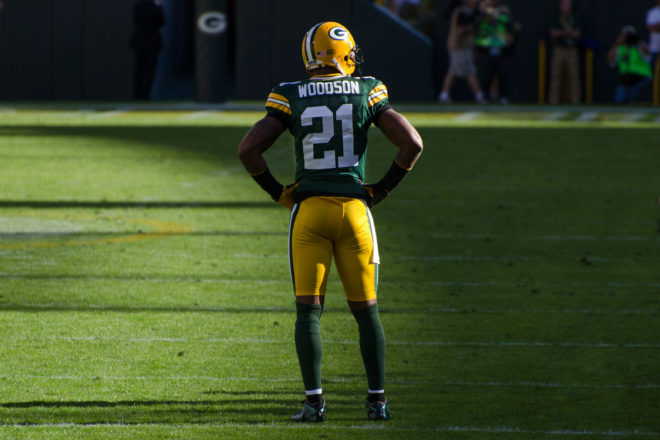 The NFL’s free agency period begins March 9th. Most consider the signing of Charles Woodson in 2006 to be the most significant free agent acquired by Green Bay since Reggie White in 1992. Photo by Mike Morbeck/public domain.

The excitement of Super Bowl LI and its improbable finish, complete with a New England comeback to give the Patriots the overtime victory, marked the end of the 2016 NFL season. While the Patriots bask in the glory of winning their fifth NFL Championship, all 32 NFL teams will soon start their planning for their Super Bowl LII runs. The NFL marks the beginning of their new league year on March 9 at 3 pm.

When the clock strikes 3 (central time), all 2016 player contracts will officially expire and the NFL’s free agency and trading period will begin. General managers, coaches and players all await the day that is filled with the excitement of risks and new possibilities. Veterans will be resigning with their respective teams while others will seek to wear new colors on Sundays while earning potentially bigger paychecks. Teams have one goal in mind, to add and retain talent while priming themselves for a successful 2017 season.

The modern NFL free agency has come a long way since 1947, when the league began a very limited form of it. Prior to ’47, the “reserve rule” was in place and allowed teams to resign players to similar contracts year after year, while the only way for players to play elsewhere was to be traded. The alternative to playing for the same team was ultimately to retire.

From 1947 until 1989, the NFL continued with a very limited free agency plan. Still extremely restricting to players, the NFL introduced the “Rozelle Rule” in 1963, named after then-NFL commissioner Pete Rozelle. The rule allowed the commissioner the authority to award compensation, in the form of money or draft picks, to teams who lost free agents at the expense of the team who signed them. To many, it was a restricting form of trading and led to few players finding new teams.

The “Rozelle Rule” was eventually challenged in the courts in 1976 and later led the NFL to introduce “Plan B” free agency. This, too, was legally challenged and brought the league to the modern free agency that began in 1992. In the years since, it has generated excitement among fans and marked a significant change for the NFL.

For the Green Bay Packers, most are aware of general manger Ted Thompson’s limited activity in free agency in favor of acquiring talent through the draft. However, the Packers were active participants in the free agent market during the 1990s, landing notable players who helped return the Packers to their championship state.

The most significant free agent signing for Green Bay, and arguably in NFL history, was defensive-end Reggie White in the first offseason that featured modern free agency. White, who previously played for the Philadelphia Eagles for eight seasons, helped lead the Packers’ defense with counterpart Brett Favre commanding the offense. In White’s fourth season, he helped Green Bay to a Super Bowl XXXI victory. He played a total of six seasons for Green Bay, earning NFL Defensive Player of the Year honors in 1998. White’s number 92 was retired by the Packers and he was posthumously elected to the Pro Football Hall of Fame in 2006.

In 1996, the Packers landed a trio of free agents in wide receiver, Don Beebe, defensive tackle, Santana Dotson, and return specialist and Super Bowl XXXI MVP, Desmond Howard. All were instrumental in the Packers’ 1996 title run.

Ten years later, the Packers signed what many consider the second most significant free agent in Packers’ history, defensive back Charles Woodson. Woodson had played for the Oakland Raiders for eight seasons before signing with Green Bay. He played seven seasons for the Packers, which included Defensive Player of the Year honors in 2009 along with five Pro Bowl selections and a Super Bowl XLV title.

More recently, linebacker Julius Peppers has strengthened the Packers’ defense during the last three seasons after signing in 2013.

Of course, not all free agent signings proved to be successful. In free agency, talent is gained as well as often lost. That is what continues to make this an exhilarating time for the NFL.