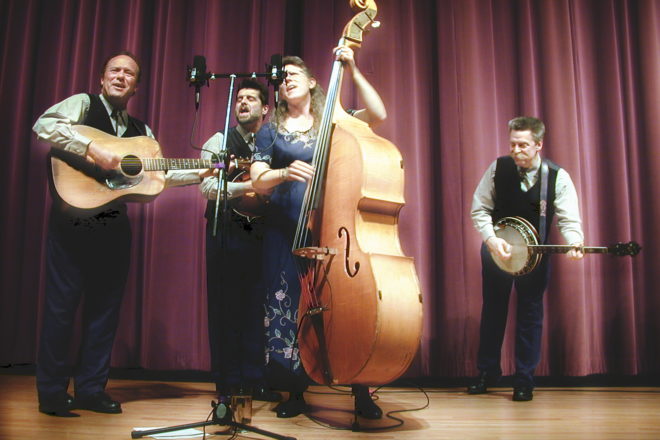 Art Stevenson and the High Water Band will take the stage at the Peg Egan Performing Arts Center’s Sunset Concert Series on July 17 at 7 pm.

Guitarist, harmonicist and lead singer Art Stevenson has been playing bluegrass music in the Midwest for 25 years and was with the award-winning Wisconsin River Bluegrass Boys from 1982 to 1996. Art organized High Water in 1993 and has contributed several original songs to the High Water repertoire.

Dale Reichert picks the five-string banjo in a hard-driving, lightning fast style. Reichert also sings baritone and bass vocals, plays the Dobro, and is featured on all of High Water’s recordings.

Bruce King, mandolin and vocals, joined High Water in March 2001. King has lived in Wisconsin for most of his life and has played with many of the state’s best known bluegrass bands. On trio and quartet vocal numbers, King sings lead, tenor or high baritone harmony.

The Peg Egan PAC is located on Church Street in Egg Harbor, and all concerts are free and open to the public. In case of rain, all concerts are held at the Calvary Methodist Church, 4650 County Rd. E, Egg Harbor. Carry-ins welcome. For more information call 920.493.5979.