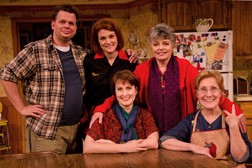 Miracle on South Division Street is now on stage at Peninsula Players through Oct. 20.
All heck breaks loose on South Division Street when a deathbed confession shakes the Nowak family to its core. In 1942 Buffalo, New York, Grandpa Nowak had a vision of peace and the Blessed Mother while working in the family barbershop. Since then, Clara and her three children have kept the faith and tended to Grandpa’s sidewalk shrine, which has been a beacon of hope to the neighbors and given prestige to the family. Unraveling the family legend leads to unexpected and uproarious results.
Pen Players also recently celebrated the announcement of Chicago’s Joseph Jefferson Award nominations with the listing of several current and past company members. The Joseph Jefferson Awards are Chicago theater’s equivalent to Broadway’s Tony Awards. Nominated for their work are Peninsula Players company members Kristine Thatcher, Callie Johnson, Carmen Roman, Nick Keenan, Linda Fortunato, Sarah E. Ross, Jack Magaw, Rachel Laritz, and Emily Waecker.
Performances are held Tuesday through Sunday at 7 pm, except for Sept. 29 and Oct. 20 performances at 4 pm. Discount tickets are available for season ticket holders and groups. Individual tickets are also available. Individual ticket prices range from $34 to $40. For more information or to reserve tickets, call 920.868.3287 or visit peninsulaplayers.com.