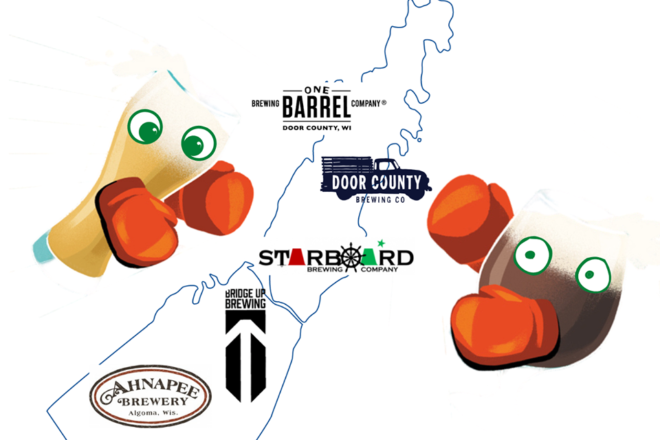 For the first time, five Door County breweries – Starboard, Ahnapee, Bridge Up, Door County Brewing and One Barrel – will face off with blind taste tests to let members of the public vote for their favorite beers during the Peninsula Brewery Battle. A similar event has taken place the past two years, but on a smaller scale. This year, the tasting will be held Sept. 26 on the outdoor patio of Sonny’s Pizzeria, and it will be limited to 75 ticket holders.

Participants will blind-taste-test three beer flights – stout/porter, pale ale/IPA and brewers’ choice – and vote for their favorite in each round. The brewery with the most total votes will be crowned the champion and will donate all proceeds to a local charity of its choice.

“It’s really going to be a fun way to get people tasting the local beer, and it’s in a beautiful setting overlooking the canal at Sonny’s,” said Jennifer Gentry, co-owner of One Barrel Brewing. “Also, owners of each brewing company will be on-site to answer questions.”

Gentry emphasized that there will be extra safety precautions in place to help ensure a clean operation, including everything being hosted outdoors. To learn more and buy tickets, visit a participating brewery’s Facebook page, or search for “Peninsula Brewery Battle” on Eventbrite.