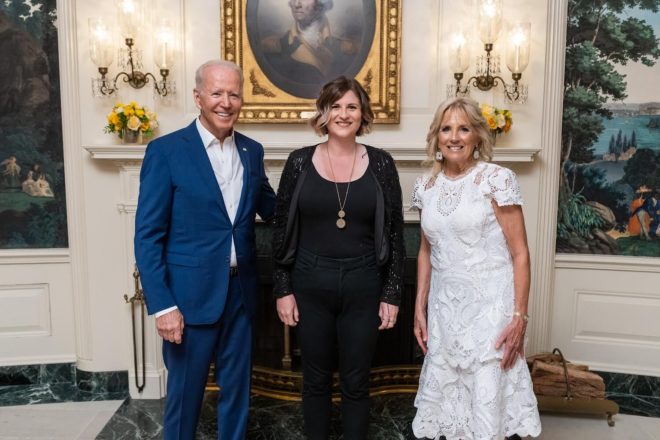 “Hi, I’m Joe, Jill’s husband. Thank you for coming,” said President Biden as he shook my hand. I’m pretty sure I laughed nervously and said, “You’re welcome.” There’s also a good chance I just stared at him, mute, like a deer in headlights, totally overwhelmed at seeing the POTUS up close and in person. I shook Dr. Jill Biden’s hand as well, smiled for a photo, then turned and walked confidently out the wrong door.

Five days before, I had received a text message from Jennifer Nettles’ bandleader asking whether I was free the coming weekend. I was just about to write back to say that no, I was scheduled to work at The Camp Store, and being a holiday weekend, it would be hard to get away – when he sent a second message: “To play at the White House.”

I’m used to things happening at the last minute like this as a bass player and singer in the music touring world. I started playing with Jennifer a few years ago when I was asked to jump in with Sugarland with a week’s notice to finish off six weeks of its nationwide tour. Being ready for anything to happen at a few days’ notice is why this career is both exhilarating and incredibly stressful sometimes.

After checking with my partner – who’s also the owner of The Camp Store at Nicolet Beach – about whether I could escape for 48 hours during the July Fourth weekend, I responded with a resounding YES! and set to work brushing up on Nettles’ music.

I worked as late as I could at The Camp Store on Saturday, July 3, then flew out of the Green Bay airport and landed in Washington, D.C., at 10 pm. I grabbed my luggage and was met by an official military driver who took me to my hotel across the street from the White House.

The band members all arrived that night or early the next morning from various places in the country, flying in from Nashville, Atlanta, New York, Door County and even a previously booked Yacht Rock corporate gig in Michigan that our keyboardist was doing. Joining us on piano for this performance was also Alex Lacamoire – one of the musical minds behind Hamilton and In the Heights, and the producer of Jennifer’s latest album.

We all met in the lobby on July 4 – excited to see each other again – and were escorted from the hotel to the TSA-style security checkpoint. Our credentials were checked; our bags and bodies were scanned; we received an “Escort Required” lanyard tag; and then we were taken into the grounds.

Everywhere we went in and around the White House, security was extraordinarily tight and plainly visible: snipers on the roofs and Secret Service agents everywhere. And as the POTUS moved around inside, security personnel in full SWAT gear moved with him, positioned by all the doors and windows.

Our stage was on the South Lawn, and as we set up, rehearsed and sound-checked, I frequently got caught up in the music and forgot where we were – only to glance up and receive a shock to see the White House in all its glory. This July Fourth White House barbecue was for essential workers, military families and White House staff members, and the lawn was resplendent with red, white and blue balloons in the trees; white chairs; and red and blue tablecloths with gorgeous, white floral arrangements in the center of each table.

It was a surreal experience seeing the White House, the West Wing, the windows of the president’s residence, the Rose Garden and the doors to the Oval Office in real life. Honestly, playing the White House wasn’t on my bucket list – it’s not the kind of goal you set for yourself because, frankly, it’s so unlikely to ever happen. The experience of being in such an iconic building and seeing all the photos, paintings, china and history was a humbling experience – something that was too overwhelming to really absorb in the moment.

After our sound check was complete, we stood nearby as Biden addressed the crowd and cameras, and again later as Jennifer sang the national anthem with the U.S. Army Band. We jumped up to perform our 30-minute set of new songs from her latest album and a handful of Sugarland songs, playing our first big, live show since the pandemic had begun. Looking out at the crowd with the White House as the backdrop was incredible – the beaming smiles all around the stage easily demonstrating how grateful we were to have this glimpse of our touring careers back in this most spectacular way.

The moment we finished playing, we were ushered over to the White House to stand at the bottom of the spiral staircase to watch the fireworks display – 30 feet from where the Bidens were watching, standing together on the balcony overlooking the South Lawn. I ended up at the edge of our group, closest to the Bidens, and the constant and imposing Secret Service presence made it very clear where the invisible boundary was between what was an acceptable distance from them and what was too close.

Being part of the celebration of the birth of America as a person who was born in New Zealand was a unique experience, and I was vividly reminded what a privilege it is to be here as an immigrant, chasing my own version of the American Dream.

High on the adrenaline of the performance, I landed in bed on July 4 at 11 pm, with my wake-up alarm set for 3:40 am. Two flights and six hours later, I was back at The Camp Store in Peninsula State Park, selling soda and ice, and feeling like the whole experience was a dream.