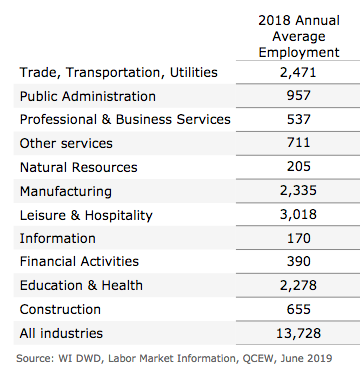 One of the favorite parts of my job at Peninsula Publishing & Distribution is meeting with, talking with and – occasionally – debating with business owners, community leaders and others throughout the Door peninsula. I learn all manner of things during these conversations, and more often than not, the things I learn I share with my Peninsula Pulse co-workers, which often leads to stories that appear in the paper.

Sometimes, however, I become frustrated by these conversations and, eventually, I feel compelled to sit down and write a story. Such is the case with the topic of employment on the peninsula.

As even the most casual observer must realize, the Door peninsula is in the midst of a huge worker shortage. What is less clear to people is the extent of the problem and the reasons for the shortage. Although the tourist season requires a significant increase in workers, Debra Fitzgerald’s story in the April 9-16 issue of the Pulse documented the shortage of manufacturing workers and the struggles of that industry to find those workers. So the problem goes beyond seasonal jobs.

Unfortunately, some of the frustrated employers I have talked with during recent months have pointed to the stimulus checks and the potential $300 extra per week in unemployment that people can receive. They then leap to the assumption that individuals are not applying for jobs because they are being “paid to stay home.” Are there individuals out there for whom this assumption is true? It would be disingenuous to assert that there aren’t some. But the reasons for the employment problem are far greater and have been with us for decades.

Look through the help-wanted ads in recent issues of the Pulse, and you will see pages of ads seeking machinists, HVAC installers and medical workers alongside the ads for housekeepers, servers, bartenders and cooks.

The lack of international student workers last year and the uncertainty surrounding those workers this year certainly play a role in filling many of these positions, but the shortage goes far beyond the scope of what these workers can fill.

For years I have said and written that Door County’s single greatest asset and single greatest liability are the same: It’s a peninsula. Unlike many other vacation destinations, we have no surrounding areas from which to draw workers. And the reality is that the county’s population has been stagnant, hovering between 27,000 and 28,000 full-time residents for decades.

The other reality is that we are aging. Although baby boomers aging out of the workforce in this country has been a well-documented story in recent years, the challenge of an aging workforce has been with Door County since the turn of the century. I first began writing about this in 2001, but I recently revisited some of my old sources, particularly the United States Census website, to see where things stand today.

The “Door County Estimate Population 2019” shows the estimated population of Door County in 2019, broken down into five-year age brackets. Here are three quick things that I observed from the data:

• The age group from birth to 19 totals just 4,850, which is 11.3% less than the 5,468 residents ages 60-69. And, as we know, a significant number of our young people will move off the peninsula when they become adults. So we are not replacing those aging out of the workforce with an equal number joining the workforce.

Perhaps the easiest way to understand the real cause of the worker shortage in Door County is to look at the table titled “2018 Employment by Industry Door Co.,” which is a portion of a larger table posted on the Wisconsin Department of Workforce Development’s website. Again, feel free to scan through this information at your leisure, but for the purposes of this column, look at the last listing: “All Industries 13,728.” Then compare that number to the estimated number in the “prime workforce age group” that I outlined above: 12,078.

That disparity, folks, is the crux of our current employment crisis: There are simply not enough residents living on our peninsula to fill the jobs we have available.

Are there some people who are sitting back, collecting unemployment with the additional $300 per week, and therefore not choosing to work, as some employers claim? Probably, but their numbers are insignificant compared to the real problem.

In order to fill the multitude of job openings, we need a larger pool of workers. In order to enlarge our pool of workers, they need to live in Door County. But this is not an easy fix. Unfortunately, the challenges to people relocating to our peninsula include housing, child care, the low wage scale for most industries in Door County, and our high cost of living.

The reality is that this will be a difficult season for Door County. Businesses will be short staffed. Seasonal fatigue will set in far earlier than usual for owners and employees. International student workers will help next year if all goes well, but we are going to need to actively address our employee shortage by focusing on the impediments that keep workforce-eligible workers from moving here – starting now.