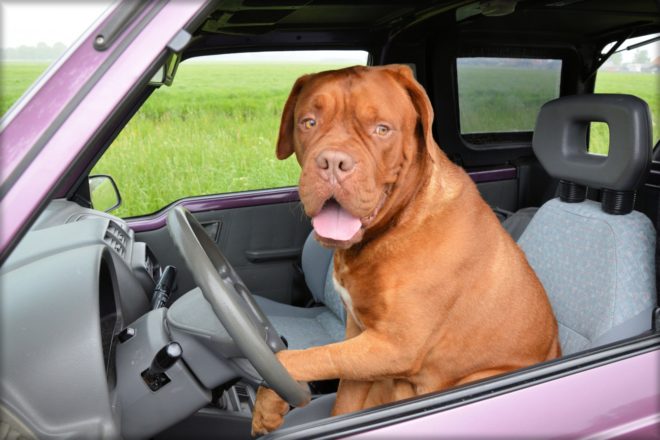 Q. My father-in-law has the cutest little dog named Ginger. Since his wife died the two have been inseparable. I think it is wonderful he has her as a companion. He takes her in the car with him all the time and what really concerns me is he lets her ride on his lap while he drives. I know this can’t be safe, but I just don’t know how I can get through to him not to do this. Is it legal to have a pet in your lap while driving? Any suggestions would be appreciated. Thank you.

A. People driving with a dog on their lap is certainly one of my pet peeves, and I can certainly understand your concern. Driving under the influence was once the major focus of safety on the road. Distracted driving of all kinds has gained national attention in recent years. Texting and driving has proven to be the latest serious road hazard, but now many states are focusing their attention on a new threat which involves the widely practiced habit of driving with a pet on one’s lap. I think this problem has gone under the radar for far too long. It is now illegal in Hawaii and New Jersey and is generally inadvisable across the United States and could possibly lead to a distracted driving charge.

The dog could jump or fall onto the floor and get under the brake, making it impossible for the driver to stop the car. She could jump onto the accelerator or stick her head through the steering wheel interfering with turning.

The canine could also obstruct the driver’s view. If the window is open the dog could jump or accidentally fall out of it, especially if the driver had to make a sharp swerve, causing injuries or even death to the poor animal. If the air bag goes off it will almost certainly kill the dog, crushing her against the driver’s face and chest. The majority of crashes resulting in air bag deployment happen at low speeds and are non-life threatening unless a dog is in the path of it.

Taking your eyes off the road for only two seconds, according to the American Automobile Association, doubles your risk of being in a collision or accident. The most common distraction a dog causes in the car is the driver taking their hands off the steering wheel to pet them.

There is no doubt dogs love going places with us in the car as much as we enjoy having them along, but they should not be interfering with the driver, and they should be protected in the event of an accident. No one ever plans for one and that’s why they are called accidents.

Your canine friend should be confined in a crate, in a dog seat belt, or at the very least riding in the back seat where there is no danger of being crushed by the airbag.

I hope you can get your father-in-law to understand the danger that comes with having Ginger on his lap while driving.