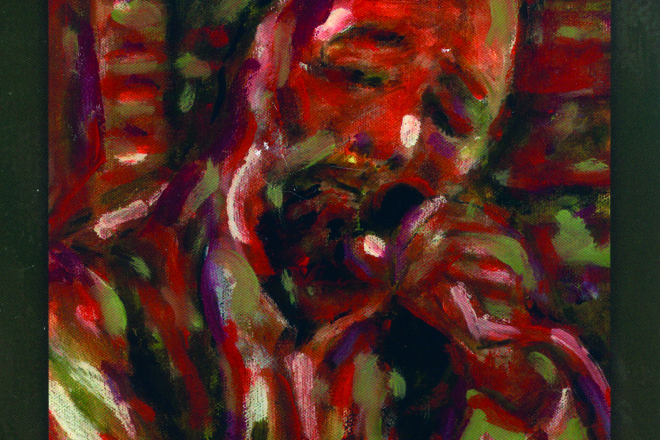 Baileys Harbor belter releases what he says is his last CD

Baileys Harbor resident Pete Thelen comes out swinging on his latest – and what he says is his last – CD release with the equally upbeat and ominous title Best for Last.

Sounding like Door County’s version of smooth bluesman Bobby “Blue” Bland, Thelen kicks off this 12-song CD with “You Make It Easy,” in which he and his band colleagues make it sound easy to be a totally laid-back, in-the-groove hepcat, laying it down like the late, great, soulful Mr. Bland.

(As a sidenote, what an ironic name for someone so non-bland! If our names fit our jobs, Mr. Bland’s last name would be Soulafire or something like that. Ditto my friend Mr. Thelen.)

Saxophonist Bennie Hughes lays down a grindhouse solo, and, with an uncredited trumpeter, nicely punctuates “You Make It Easy” throughout.

Now, with a project that he says will be his last full-length recording, you’d think Thelen would be hogging the whole thing. He’d have good reason to, but as anyone who knows him will tell you, that’s not the way he rolls. Thelen’s heart is too big and generous to be like that.

He shares the space on this disc with musical pals he’s made along the way. Six of the 12 tracks feature others, beginning with track two, featuring Annie Dekom seductively and powerfully delivering Thelen’s “Some Kind of Sign,” which also includes blistering slide guitar from Charlie Prazma.

After that, Lester Chambers delivers a beautiful take on Thelen’s mournful “Wind up from Mexico.” KK Martin adds equally chunky and stinging guitar work. Thelen’s lyrics include the classic, make-me-smile-every-time reference to “Jody,” the guy who steals everyone’s girl while they’re far away fighting foreign wars or just off at work at the Ford plant. It’s one of those spooky blues songs, and Thelen seems to have a predilection for that sort of song because there are several of them here.

Number four, too, comes from a guest artist: Rena Haus is the vocal star of “Part-Time Love.” Playing off her melodically is pianist Mike Shellans.

Thelen returns on the fifth song, a duet with his old pal Mike King on the unlikeliest of blues instruments: the accordion. But it works beautifully. The song is called “Get’n Down to Business,” and they certainly do. Oh, and that bass you hear? That’s also Mike King earning double pay on his accordion.

My favorite song on the CD might be number six, the trippy “Voodoo King.” It starts off with John Hoffman IV providing a military drumbeat. Then a psychedelic guitar (Charlie Prazma again) interjects as Thelen sings about the Voodoo King, sounding like he’s singing in a dark, New Orleans alley, with his voice eerily echoing, reverberating off the walls and off the thick, low-hanging clouds that you just know are there. It’s scarifying.

Track seven features the strong vocals of Linda Moss, singing stingingly about a “Storm A Brewin’.” Again, Charlie Prazma’s stinging guitar is front and center, and he’s also playing bass on this track. That guy has a lot of hands!

Next, Thelen duels with the tenor sax of Jim Massoth in the song called “Lost & Found.”

Track nine, “Move On,” sounded instantly familiar, but I wasn’t sure why until I saw that the droning instrument featured is pat mAcdonald’s cigar box, played by pat himself, with all the other sound coming from Hans Christian, who owns the Sturgeon Bay studio where Thelen recorded three of the songs on this record.

Track 10, “Spider Lake,” is another one of Thelen’s spooky blues songs, but this one is taken straight into cinematic stereoscope, with Hans Christian providing the musical atmosphere through his gifted producer’s knowing touch.

More blistering slide guitar – provided this time by John Reuter – is featured on the next song, a loping blues number called “New Pain.”

Thelen closes with the beautiful “Thoughts Passing Thru,” with Hans Christian’s cello work giving sweet gravitas to this parting shot.

The rock ‘n’ roll wizard is going to make everything OK. Nice one, Pete!

You can buy Best for Last at pete-thelen.com. I bet if you ask nicely, Thelen will even sign a copy for you. (Actually, he’s signed them all in advance, beneath his beaming visage on the back cover.)