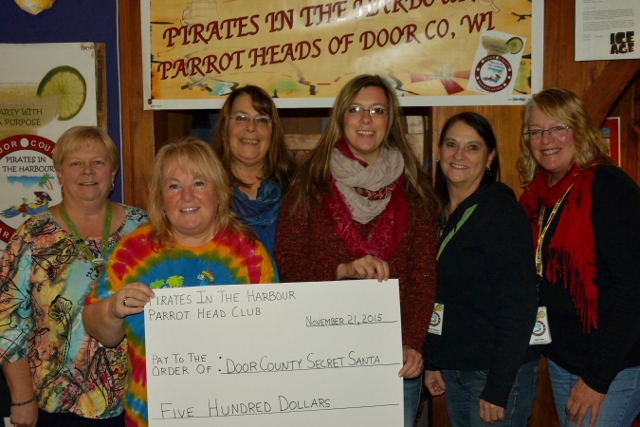 Members of Pirates In the Harbour gave checks away to eight organizations during a gathering at J.J.’s in Jacksonport on Nov. 21. Photo by Suzi Hass.

With Jimmy Buffett playing in the background, Pirates in the Harbour held its annual “party with a purpose” event to distribute money it has raised to benefit various organizations throughout the community.

“We want all of our money to stay in Door County,” said Diane Abts, president of Pirates in the Harbour. “We’re big proponents of feeding people. To me, a hungry person strikes our hearts. We don’t want to pick and choose one food pantry over the other. No matter where they live in Door County, we want to make sure they are helped.”

The group, which was sanctioned by Jimmy Buffett’s Parrot Heads In Paradise, Inc., in October 2009, provided checks to four food pantries – Holy Name of Mary food pantry in Maplewood, Feed My People in Sturgeon Bay, Koinonia Kupboard in Sister Bay and Door of Life food pantry in Sister Bay.

“This is incredible,” said Heidi Penchoff of the Door of Life food pantry. “What this means to us, year after year, this has carried us through the winter months and we have been able to really sustain our food pantry and keep it going because of the Pirates in the Harbour. It comes at a perfect time. Our food pantry is open 24/7 and we have a freezer now, so I’m going to be able to put some substantial things in the freezer like hams and turkeys. People are going to be able to have a real Christmas dinner. It’s a big deal. I don’t know what we’d do without them. Blessing isn’t a big enough word. And it’s all based on Jimmy Buffett.”

The group also provided checks to the Egg Harbor Volunteer Fire Department (“They’re right in our backyard. They’re a great group of guys. We see them at a lot of events, and they’re always smiling and happy,” Abts said.), Door CANcer (“We worked with them right from Day 1. The things they do for Door County are just amazing,” Abts said.), Secret Santa (“They really take care of people in need of heat,” Abts said), and Friends of Peninsula Park.

“When we first became a club, we decided all of our money would stay in our county, and we tried to find organizations that have low overhead so we get the most bang for our buck,” Abts said.

She also mentioned that the club rents its pirate ship to the teachers at Sturgeon Bay High School for a nominal fee. They turn around and invest that money in a Pirates In the Harbour scholarship.

“Door County has just embraced us so warmly,” Abts said. “When we’re dressed up in a parade, it will be a week later and I’ll be at Econofoods and I’ll hear someone going ‘Arrhhhh!’ I’m not even dressed as a pirate and they know who we are.”

The group meets the third Saturday of every month at 6:30 pm at Mr. G’s in Jacksonport.