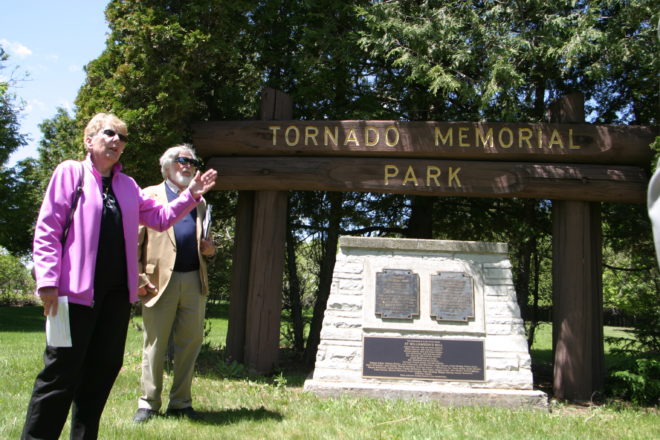 A short ceremony was held June 2 at Tornado Memorial Park to unveil a new plaque naming many of the 60 victims of the Oct. 8, 1871, fire that wiped out the community known as Williamsonville (or Williamson’s Mill).

“These names humanize the people that died here. Suddenly there’s a name that goes along, not just a number. These people had lives. They had hopes and dreams,” said Barb Chisholm, historian of the Belgian Heritage Foundation in Namur. “This is great. I’m just so excited that it’s here.”

Paul Graf, president of the Friends of the Door County Parks, said the state had once expressed interest in erecting a plaque to fire victims, but when the project dropped off its radar, the friends group decided to follow through.

“It’s really unique what we have in Door County with the support of our friends group,” Door County Parks Director Ben Nelson told the small group assembled for the unveiling. “Not many county parks or park systems in general have that sort of support. This wouldn’t have happened without them.”

Graf said the friends have “a wonderful working relationship” with the county and reminded everyone, “We have to realize these parks are a treasure. We’re very fortunate to have them.”

Chisholm said 76 or 77 people lived and worked in the area at the time of the fire. Only 17 survived.

“Those that survived told terrible, terrible stories of what happened here,” she said, mentioning 35 people who gathered in a potato patch who were found the next day burned beyond recognition, and seven who sought refuge in a well.

“The bottom five lived and the top two died,” she said. “It was like a tornado of fire and wind – hence the name Tornado Park. Every place they ran, there was a wall of fire. They could not escape. Many of them just lay down, and the fire consumed them.”

Chisholm said Tornado Memorial Park is the only place in all of Southern Door that recognizes the victims of the fire.

“This memorial helps remember not only these people but also the other victims of the fire,” she said.

Graf pointed out that Chisholm does not believe the story that the Peshtigo Fire – on the same day – jumped the bay, and he agrees with her.

“It did not come from Peshtigo. It was two separate fires,” Chisholm said.