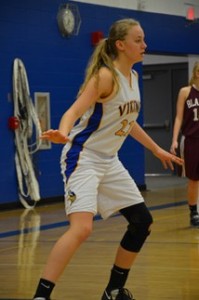 Makenna Ash was unanimously selected to the All-Packerland Conference first team, she was the only Door County player selected to this team.

Do you play other sports? Cross country and track

Do you prefer playing team or individual sports? Why? Team because there’s a huge connection and it’s cool to win as a team and to know everyone contributed.

Do you prefer playing offense or defense? Why? Offense, because there’s no better feeling than making a post move I’ve been working on, and watching the ball go in the hoop.

What’s your pre-game ritual? Usually I just listen to music and stretch, and Chloe Massad and I practice behind-the-back passes.

What’s your favorite warm-up song? I’m not usually the one in charge of the music.

What’s been your greatest sports moment so far? I don’t know, there have been a few: in our last game I got 35 points, but we lost; I’ve been to State for track twice; and the Lena [basketball] game last year was the most energy I’ve felt from a crowd.

What’s been the worst? Probably this summer… I tore two ligaments in my ankle and had to miss the last AAU game of the season, and sit out for cross country this year…I don’t like not participating.

Is there an athlete – or anyone else – who inspires you? Helen Hecht works hard in practice and in games, and she’s a really good leader.

Also, my freshman year I played against Algoma’s Karissa LeCaptain, she was a great post player and inspiring…she actually scored her 1,000th point against me.

What’s your favorite sports team to watch? I have to say the Packers because if I don’t my grandmother will disown me.