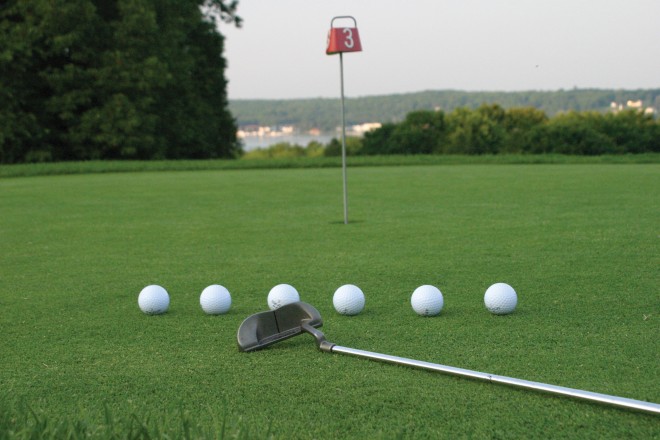 Now that summer is in full swing, it’s a great time to evaluate areas of your golfing game. After improving upon my long game this season (which was my goal), it has become clear that the best place for me to shave digits from my handicap is on the greens. Too many three-putts have left me in the bogey land of golf. After some extensive research on putting, and some helpful tips, I have already started to enact positive change within my short game. Here’s a taste of what I’ve been working on.

I arrive early and spend some quality time on the practice green. Door County is home to nearly a dozen courses and each hosts greens of differing speeds. Distance control should be the focus when putting on the practice green. I focus on hitting from one side of the green to the other to practice long putts. The goal here is to achieve better ball placement, not to sink fifty-footers. I don’t worry about aiming for the cup. Instead, I focus on leaving the ball within safe putting distance to the cup.

When practicing sinking putts, I’ve been instructed to line up balls between four and six feet from the cup on a flat section of the green. Research tells us that touring pros sink only about half of their six-foot putts, so the average golfer should not get too frustrated when their percentage is lower. Practicing straight putts is important because it narrows the concentration on the stroke and not on the break. Obviously, if you miss a straight putt you will know that you made a bad stroke. However, if you miss a breaking putt, the culprit could be a less-obvious problem with stroke, speed, or an un-square putter face.

The most common problem with struggling putters is keeping the putter face square to the line throughout the stroke. This is where lots of practice can really pay off. Stick to the four-to-six foot putts on flat sections of the green. Set a goal for the number of putts that you can hole in a row. Gradually increase this goal until you can get up to fifty. This is an excellent exercise for teaching you how to putt under pressure. It also does wonders to bolster your confidence on the course.

Many players will remember only the high and low points of their rounds, without taking into account the more specific history of each hole’s play. Try keeping track of the number of putts during your round by marking them on a scorecard. Once you begin charting how many putts you are averaging over 18 holes, you can establish how you are really improving on the greens.