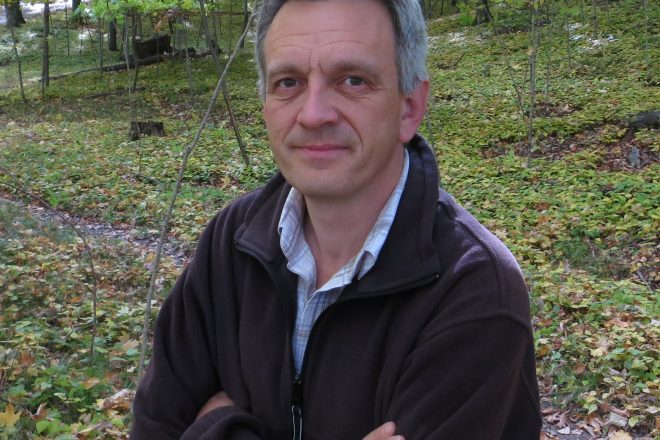 If you’re a traveler, you may be familiar with the name Kevin Revolinski – or his blog name, The Mad Traveler. But it wasn’t until his mid-twenties that Revolinski had his first experience abroad during a volunteer trip to Chihuahua, Mexico. Especially powerful was an excursion to a Rarámuri village deep in Mexico’s Copper Canyon that made him feel “a million miles and two universes away from a little town among dairy farms in Wisconsin – as if I had woken up on the pages of a National Geographic spread.”

Since then, Revolinksi – who lives in Madison when he isn’t traveling – has filled three oversized passports and visited places such as Italy, Turkey, Thailand, Africa and more, chronicling his experiences on his blog, The Mad Traveler.

He’s now the author of 16 books, most of which are travel guides, including 60 Hikes within 60 Miles: Madison, The Rough Guide to the Caribbean, Backroads & Byways of Wisconsin and others. His work has also appeared in The New York Times and Chicago Tribune, and he has been on the Today Show and is a frequent guest on Wisconsin Public Radio.

Revolinski wrote a travel memoir, The Yogurt Man Cometh, which was released in 2006 and chronicles his time as an English teacher in Turkey. His newest release, Stealing Away, is his first work of fiction: a collection of short stories primarily set in Wisconsin and the Upper Midwest, as well as a few international travel settings.

I sent Revolinski a few questions about his foray into fiction and what it’s like writing a short-story collection.

Grace Johnson (GJ): How did your travel writing inform your fiction writing?

Kevin Revolinski (KR): What makes us human is in so many ways universal, yet our environment or culture puts subtle or not-so-subtle spins on it. In travel writing, we try to take a foreign place from being exotic and “other” to something more personal and familiar that a reader can relate to and find themselves in. Yet when writing about our hometowns, we often need to look at it with a stranger’s eyes.

In either case, the setting is a character, major or minor, and interacts with the rest of the players in the story and sets the tone. And in travel writing, as in fiction, characters make the story come alive.

My travel memoir, The Yogurt Man Cometh, is nonfiction, but of course it’s full of characters who had to be developed to make the story more than just a description of a place. There are exceptions, as always, such as Ray Bradbury’s “There Will Come Soft Rains.”

GJ: Do you have a favorite story in your collection? Why?

KR: Tough choice. I love “Mosaic” for taking me out of my typical writing style or “The Butcher Boys” for the discomfort it gave readers and even me as I wrote it and “discovered” where it was going. But I think “Picking Blueberries” is a bit of tribute to my grandparents, and so it gets the nod for being most personal.

GJ: It’s always impressive to see short fiction writers be able to package up a complete story in such few words. There was even one in this collection that was four pages long! That being said, how do you decide when one of your stories is done?

KR: The same way my grandmother used to cook and bake: no measures, just add “some” of this and a “pinch” of that until the dough is right. That is as helpful to another writer as my grandmother’s recipes were to me in the kitchen – as in, “not very.”

But I think the more you write and the more you read, you start to recognize when you’ve got enough of all the ingredients and in the right balance. You can feel it. (And then your editor can confirm or deny it.)

Also, with any writing, walking away for a spell and giving [the ingredients] time to ferment often reveals if they need something more – or less. “Butcher Boys” is a perfect example. I had finished it in about half as many pages, but it just felt wrong, like I’d reached the wrong conclusions. Then I realized someone was missing from the cast. I had to go back and work an extra character into the story, and it changed the entire direction, giving me several more pages and a much more satisfying outcome.

GJ: Was it difficult figuring out which stories you wanted to include in this collection? Or did it come together naturally?

KR: It came together naturally. These were ready; others really weren’t or needed to be chalked up as writing exercises. But “ready” is also relative. Four of them had been published in literary journals, but I still felt I needed to edit them even more.

An anecdote making its way around the internet is about Stewart Stern being asked by a writing class to see a copy of his 1955 script for Rebel Without a Cause. He allegedly dug one up, looked at it for a second and crossed out a line.

GJ: What are you currently reading?

KR: Ann Patchett’s This Is the Story of a Happy Marriage and Rebecca Makkai’s Music for Wartime: Stories (and a half dozen others with bookmarks at various stages that I may or may not come back to!). My to-be-read stack is like the screen on Tetris when you are finally overwhelmed at the end of the game.

Revolinski will be at Write On, Door County on Sept. 30, 6-7:30 pm, for a reading and signing. The program is free, but registration is required. Visit writeondoorcounty.org to register and learn more about Write On’s current COVID-19 policy.