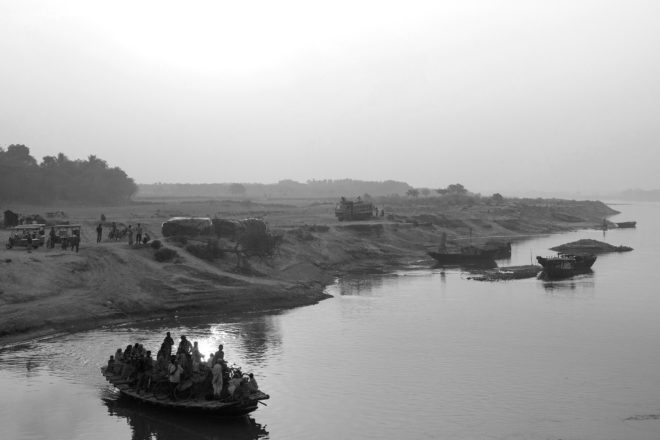 Matiari, a small village along the banks of the Ganges River in India. Photo by Kevin J. Miyazaki.

This spring, photographers who submit to the Peninsula Pulse’s 2017 Hal Prize literary and photography contest will have the opportunity for their creative works to come before the eyes of Milwaukee artist and photographer Kevin Miyazaki, this year’s photography judge. 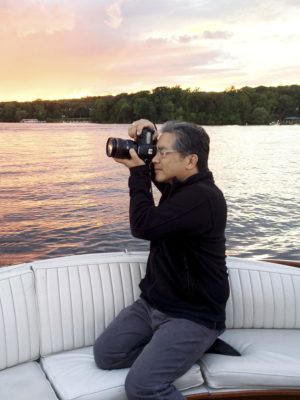 Miyazaki’s photography explores family history and ethnicity. It has been exhibited at museums, festivals and colleges across the country, including Photo Center Northwest in Seattle and Rayko Photo Center in San Francisco, and in Wisconsin at the Madison Museum of Contemporary Art, the University of Wisconsin – Milwaukee, St. Norbert College and the James Watrous Gallery in Madison. He is the author of two publications: Perimeter (2014) and the artist’s book, A Guide to Modern Camp Homes: 10 New Plans & Designs for Persons of Japanese Ancestry (2013). Miyazaki is also the founder of collect.give, a charitable online photography gallery, and tinytinygroupshow, an online group exhibition website.

I recently caught up with Miyazaki to talk about his photography career, exploring personal emotions through work, and what makes a good photograph. For more of Miyazaki’s work, visit KevinMiyazaki.com. For more on the Hal Prize, visit thehalprize.com.

Alyssa Skiba (AS): When did you know you wanted to be a photographer?

Kevin J. Miyazaki (KM): At an early age. I loved playing with a box of vintage cameras that my mom had in our attic and my first pictures were taken with an old Brownie Hawkeye camera. The interest took hold and I advanced from pictures of my cat and family to junior high and high school publications. But I was most inspired by a Sports Illustrated photographer named Heinz Kluetmeier, who was based in Milwaukee and became a mentor and inspiration to me while I was in high school. I feel fortunate to have found my calling so early in life.

AS: Your work covers issues of family history, memory and space, both personal and institutional. What inspired these directions in your work?

KM: I make a living by doing assignments for magazines, shooting travel, food and portrait subjects. So my artwork has mostly addressed things of a personal nature, looking inward at the experiences of my family and ancestors. I also grew up in suburban Milwaukee, where the vast majority of my friends had European ancestry, so early on my own family story seemed curiously different. Addressing my own history and ethnicity seemingly has no end in holding my interest, and I think that’s what should drive the making of artwork – a subject that grabs hold and won’t let go.

AS: A few years ago, you set out on a very ambitious photography project for the Haggerty Museum of Art exploring the lives of people in close proximity to Lake Michigan. Is there something you hope viewers take away from the project?

KM: When the museum approached me, they asked me to create a new body of work which would address the topic of fresh water and the Great Lakes. I chose to focus my energy on Lake Michigan, which I’ve lived in close proximity to for most of my life. I realized that while I loved its presence in the state and region, and appreciated its beauty, I also largely took it for granted. So the project became a two-week drive around the lake, for me to really see it, and to meet people to whom it was important. I ended up photographing nearly 300 people, as well as making pictures of the lake itself. I hope people will come to appreciate the human connection to the Great Lakes in a deeper way than they may have before. 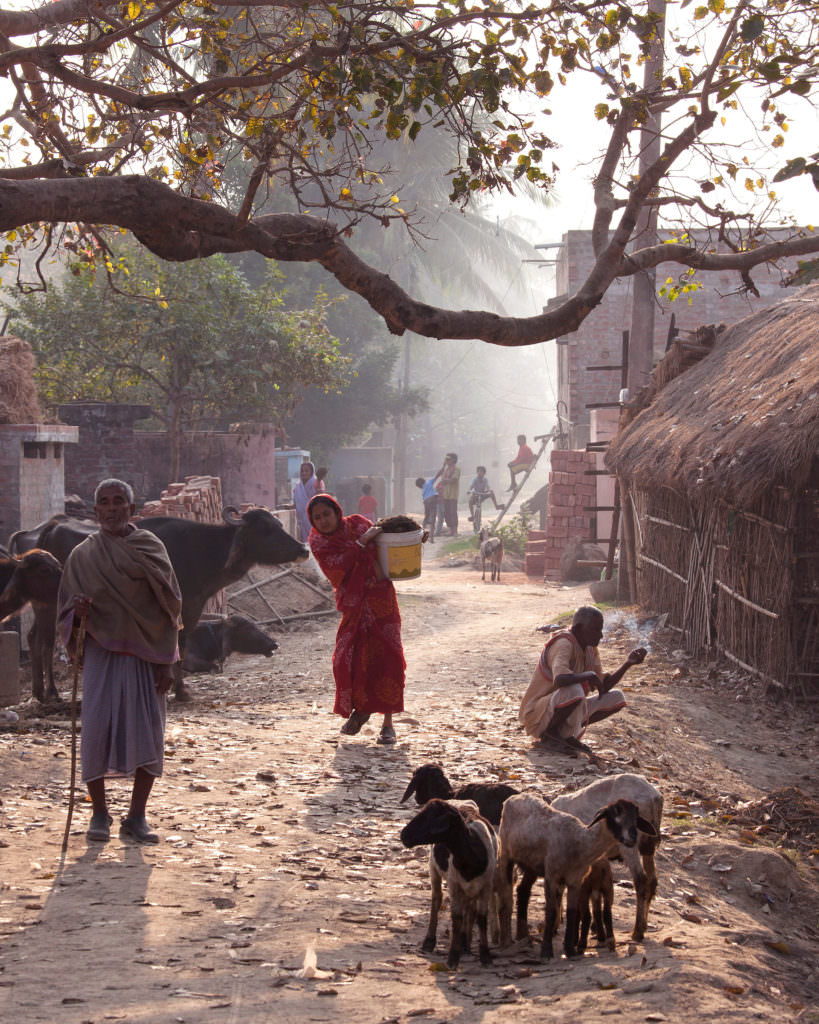 Matiari, a small village along the banks of the Ganges River in India. Photo by Kevin J. Miyazaki.

AS: I am drawn to your artist’s book, A Guide to Modern Camp Homes, which, at first glance, appears to be a home architectural catalog but with further reading, is actually a poignant representation of the living conditions of displaced Japanese Americans prior to World War II. It is also a topic you visit with your ongoing series, Camp Home. What kind of emotional and historical journey have these projects taken you on?

KM: The incarceration of Japanese American during World War II has always been an incredibly personal topic for me. My father and his family were sent from Tacoma, Washington to two different camps during the war. At both of those locations, one in California and one in Wyoming, I’ve photographed the reuse of barracks buildings for the series, Camp Home. After the war, the government repurposed the buildings, passing them on to homesteaders populating the area. So the barracks that held families like mine became houses and barns in the surrounding region. I love the idea that these structures have a life beyond their initial purpose. The artist’s book, A Guide to Modern Camp Homes, was originally exhibited in the Wisconsin Triennial at the Madison Museum of Contemporary Art. It was modeled after the Sears home catalog, A Guide to Modern Homes, which would have represented the ideal American home designs of the time. I was interested in creating a publication that didn’t actually exist at the time, something that explained living conditions to those entering the camps. And the use of the government and advertising language of the day gave the piece a harder edge, while remaining factual in its information.

AS: What role can photography play in political, social and environmental issues?

KM: I started my career working as a newspaper photographer and I have a great deal of respect for those working to accurately document what happens in our world. Photography can serve as an important record to our times, and that power has been more democratized in recent years, with the increase in phone photography and video. But also in artistic pursuits, I think photography has an accessible quality unlike other artistic mediums. To affect thought or change, we first need to see and be interested in the work, and photography is a great vehicle. 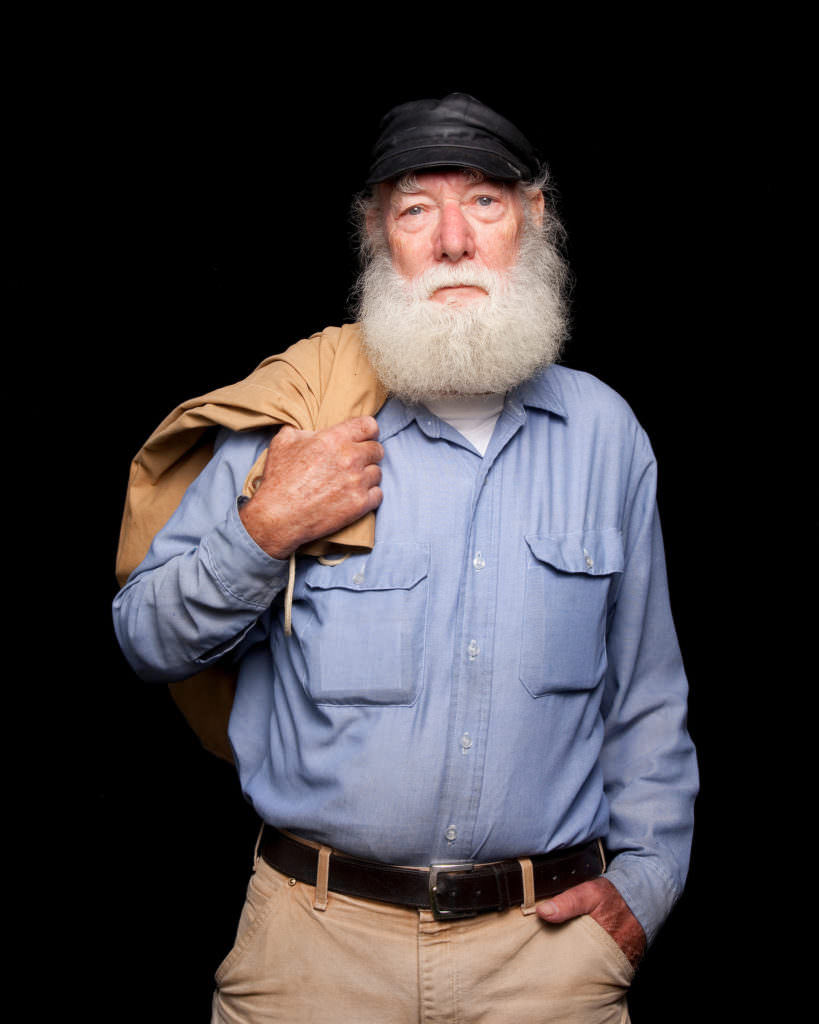 Rich Kuenstler, 79, seaman, for the “Perimeter” project at the Haggerty Museum of Art. Photo by Kevin J. Miyazaki.

AS: You will be judging the photography contest for the Hal Prize. What makes a good photograph?

KM: That’s a hard question to answer! Certainly there are elements of skill in evaluating a photograph: noting the decisions and choices made in terms of composition, subject matter and equipment use. But that said, a photograph doesn’t need to be technically polished to be successful. I’m personally drawn to photographs of all manners – work from seasoned fine art photographers to snapshots in old family albums. Capturing a moment, a scene or a memory can make a photograph successful, whether made by a young child or an accomplished professional.

AS: What advice would you give to budding photographers?

KM: It sounds simple, but to increase your skill level and to establish a point of view, it takes a lot of practice. Trial and error, over and over again. I once had an interviewer ask me to describe an artistic failure that led to success. My reply was that when working in photography, I regularly fail hundreds of times a day. Failure is built into the process, but eventually the successes become more numerous and consistent. An innate talent can help of course, but nothing replaces the hours spent honing the craft.