The approach of August frequently brings this question from observers of nature, “What has happened to so many of the birds?” One can assume that much nesting has been completed and that the bird population has at least tripled over what it was in late May. This leads people to expect to see a lot more birds than they have been seeing.

There are several points to consider. Available food for these creatures usually is very high during this season and consequently they don’t have to move about very much in order to obtain it. There are ample insects, caterpillars, seeds and wild fruits. 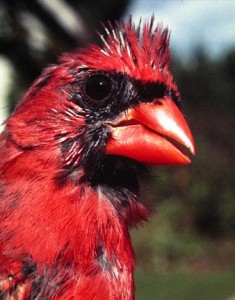 An adult male Northern Cardinal showing new feathers coming in as he is going through his post-breeding molt.

Look at some of the large birds (such as crows and hawks) as they fly overhead and you will notice missing wing and tail feathers. Adult birds are experiencing their post-nuptial (after marriage) molt and are undergoing a very stressful time in their lives. Gradually most of the adult songbirds will lose all of their feathers and new ones will replace the lost. This entire process takes place in orderly fashion. Matching feathers in both wings, for example, are usually lost at the same time. I have an idea that many molting birds don’t fly any more than they have to. They tend to stay put more and therefore aren’t seen as much by people.

Because these songbirds must be capable of flight in order to obtain food and also to escape from their enemies, they at no time lose enough feathers to become “grounded.” The entire process with Purple Finches takes about 10 weeks.

Ducks, on the other hand, lose all their primary flight feathers at the same time and become flightless while their young are growing up. They, however, can swim and dive in order to get food and find protection. And to further help them escape their natural enemies they change into what is called their eclipse plumage, which affords excellent camouflage.

We look at our own woodland and see that tree and shrub growth has filled in many of the openings that existed last spring. Hiding places abound, decreasing the likelihood of the birds being seen by their predators as well as birdwatchers. The rank growth also offers birds shade, so important during what now is usually the hottest part of summer. 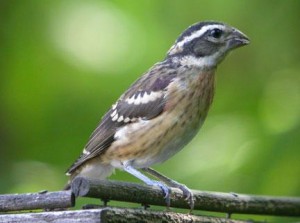 A constant and reliable supply of water is a critical requirement for most birds during the heat of mid to late summer. On many occasions in the past we’ve stumbled upon sizeable concentrations of birds “cooling” it along an isolated pond or stream where they could drink, bathe, remain comfortable and usually find plenty of food.

Bird songs so abundant in spring and early summer have decreased considerably. This makes locating the birds more difficult and also makes their whereabouts less conspicuous. With nesting completed for many species, there is no longer need for territorial singing. Family groups are on the move, here one day, gone the next. Earlier in the birdwatching season we could accurately foretell which birds we would see at various places while monitoring our 48 nestbox Eastern Bluebird trail, all within a radius of around three miles of our home. Now we take what comes, but that too can be exciting with new surprises occurring when least expected.

Two members of the finch family, both nesters in Door County, are still fairly vocal, the Northern Cardinal and the Rose-breasted Grosbeak. Cardinals have one of the longest nesting seasons of any bird in the state with it being quite common for them to have three broods of young in a summer. A male sang his clear-whistled song repeatedly a few days ago. Perhaps it was he who also entertained us recently while feeding one of his young in our front yard.

It’s the baby rose-breasted Grosbeaks who are doing the vocalizing now. They re off the nest and can be heard with their far-reaching “HEE-er, HEE-er” calls, very likely a food begging tactic, as though these fledglings are loudly letting their parents know that we’re HERE and we want FOOD!

We enjoy watching the Mourning Doves drink, but seldom bathe, at least in our yard. Unlike other birds that dip their bills into the water, then tip their heads sharply upward allowing the water to trickle down their throats, the doves drink as though their beaks were siphons or drinking straws. They are capable of making sucking or pumping actions in their throats, much like a horse, and keeping their heads downward and in the water as they drink.

One of our favorite birds during this season is the Indigo Bunting. They come to bathe and especially to eat tiny bits of cracked corn scattered on the driveway. But the fact that the males continue to sing, as though summer has no end, places them near the pinnacle of the best and most energetic songsters. 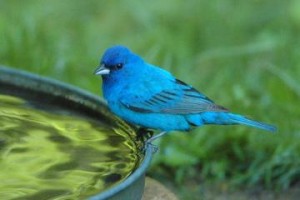 An adult male Indigo Bunting at the bird bath.

“Sweet-sweet, where-where, here-here, see-it, see-it,” over and over they sing from a high perch, as though they’re intent upon out-singing every other songbird within earshot. What a great summer favorite they have become especially to those who know and enjoy their music. I hereby move that the Indigo Bunting be awarded the indigo-blue ribbon, the number one singer of lazy summer days.