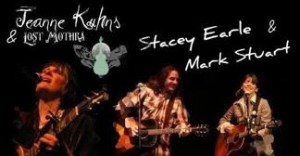 Stacey Earle began her professional music career playing with her Grammy Award-winning brother and his band Steve Earle & The Dukes before establishing herself in Nashville. Mark Stuart was a musician-in-training even before he began playing in Nashville’s honky-tonks and beer joints at the age of 15. By 17, Mark had started his own band and cut an album. He was between tours when he met Stacey at a songwriters’ night. The two have since been writing, recording, and performing together in the American folk circuit and across Canada and Europe, weaving together lovely harmonies with clever acoustic guitar interplay, humorous storytelling, and autobiographical songwriting with blues, pop, country, and rock influences.

The Holiday Music Motel is located at 30 N 1st Avenue in Sturgeon Bay. Both shows will begin at 7 pm and cost $10 per person. For more information or to purchase tickets call 920.743.5571 or visit http://www.holidaymusicmotel.com/tickets.