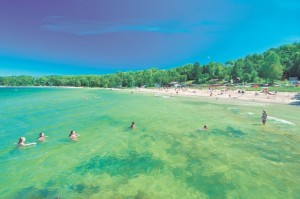 As summer hits full swing, people will flock to Door County beaches. The Door County Public Health Department monitors 34 public beaches in the county to ensure they are safe for swimmers. Photos by Len Villano.

The county public health department surveys beaches and found elevated bacteria counts at many sites after the rain.

“Most of the time [the problem] is related to local runoff,” said Rhonda Kolberg, director and health officer for the Door County Public Health Department.

Stormwater runoff is a common culprit in beach closings because it collects sediments, bacteria and chemicals on the land and rushes it toward the water.

Many beaches in Door County have already taken steps to help stormwater filter before it reaches Lake Michigan or Green Bay with help from the Door County Soil and Water Conservation Department (SWCD).

“We’re trying to get their beaches in a state where they can minimize stormwater runoff that we know is impacting the beaches,” said Amanda Surfus, SWCD conservationist.

By slowing runoff and getting it to filter through soil and sand, the water that eventually gets to the beach will be cleaner. Changing the slope of the beach, bringing in coarser sand, building small dunes and planting dune grass are ways the SWCD helps beaches filter stormwater.

“Pretty much across the board, one thing we noticed at beaches in Door County is that we have really fine grain sand, which doesn’t allow for any infiltration,” Surfus said.

Water has an easier time soaking into coarse sand, which means more pollutants get filtered before reaching the shore. With the natural, fine sand on most Door County beaches, most runoff just heads straight to the water without filtering through the sand.

Plants, like dune grass, help filter runoff because their root systems make space for water to flow into the ground, but dune grass doesn’t just help with filtration. It helps keep birds, and bird waste, away.

“The dune grass helps with that because planting the dune grass and creating curved paths allows for birds not to walk directly back and forth from the grassy area, the beach area and the water,” Surfus said.

Birds like to be able to see their surroundings, so they avoid areas with plants taller than them.

Bird and other animal waste contains E. coli, the bacteria health workers test for on the beach. The strains of E. coli they find aren’t always the ones that make people sick, but higher E. coli counts usually mean there are more pathogens, or germs, nearby. 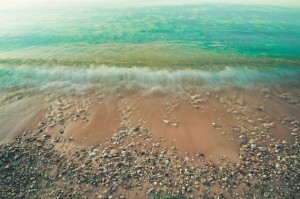 “It’s not saying that if you go swimming you’re going to get sick with E. coli, it’s just an organism that’s shown to have a high correlation with other pathogenic organisms that could cause illness,” Kolberg said. “What we’re telling people if there’s a beach advisory or closure is that the chances of contracting a disease is higher. It doesn’t mean they will.”

Thirty-four public beaches are monitored in Door County, and the 12 most popular of those are considered high-priority and tested four times per week. Others are tested once or twice per week.

“When the program first started, we looked at beaches that were popular and had a lot of use,” Kolberg said. “We used that as our main criteria.”

Testing is done at a depth of three feet to represent where a child might play in the water. The deeper the water, the smaller chance of high bacteria levels.

Door County was one of the first areas to start renovating beaches to keep them clean, Surfus said. Now other places, from as far as the East Coast, are calling the SWCD to get healthy beach advice.

“Our water quality was quite good compared to other places,” Kolberg said.

Lakeside Park Beach in Jacksonport will undergo renovations this fall. When it rains, stormwater currently runs through a pipe from Highway 57 to the beach, resulting in salt, dirt and chemicals headed straight for the water.

“The first thing they’re going to do is move the sand and put some different sand in, and they’re going to plant dune grass like they did in Egg Harbor,” said Alvin Birnschein, Jacksonport chairman.

Jacksonport will divert runoff into a series of underground tanks that will catch salt, sediment and pollutants and then allow the water to slowly flow underground to the lake.

People can protect themselves and protect beaches on an individual level. Kolberg said never to drink water straight from a lake or stream, and to avoid swimming the day after a big rainfall.

But what people do away from the beach makes a difference, too.

“What you do at your home, in a parking lot or in a roadway…is all going to go in our beaches at some point,” Surfus said. “Just be conscious of what you do on the land.”

Fertilizers on lawns and gardens, salt, oil and gasoline on the roads and animal waste left outside all eventually end up as runoff.

“You think you are far away from a beach but the water is going to eventually drain and make it to our lakes, rivers and streams,” Surfus said. “Anything you do is going to affect that water quality.”

To check for beach closures or advisories, you can check online at http://www.wibeaches.us or look for signs posted at the beach.