Alewives spread throughout the Great Lakes in the 1950s, but only catch our attention when they die and wash up on the beach. 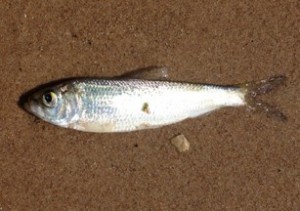 It’s the smell that does it – the scent of rotting fish that’s lately pervaded Door County beaches.

But according to local commercial fisherman Charlie Henriksen, the ring of alewife corpses around the peninsula, and most of Lake Michigan, is nothing compared to a few decades ago.

“When they first invaded it was incredible – they had years where they actually cleaned the beaches in Chicago with bulldozers the die-offs were so bad,” Henriksen said. “I worked for the Chicago park district starting in 1968 or ‘69 and every morning we’d rake our beach and dig a hole and bury alewives.”

Alewives are an invasive species that typically live in the ocean, but come to fresh water to spawn. They made their way to the Great Lakes more than 100 years ago, but aren’t perfectly adapted to the cold fresh water.

Freshwater soaks into fish easier than saltwater, so freshwater fish typically have bigger kidneys to process all the extra water. Alewives are meant to live in the ocean, so pumping all that water through their puny kidneys puts them under a lot of physical stress.

When another stressful event occurs – such as wind pushing cold water up from a deeper part of the lake – alewives tend to die off.

“When it’s a cooler spring like this and we have a lot of cold water in the lake, the alewife doesn’t move fast enough and will suddenly get overtaken by a current of cold water and that’s what’s killing them off,” Henriksen said. 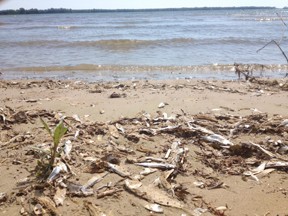 “[Those mussels] are basically stealing the phytoplankton, leaving not so much zooplankton, which is what the alewife feeds on, so there’s not much food for the alewives,” said John Janssen, a professor at the University of Wisconsin – Milwaukee School of Freshwater Sciences.

Although alewives are invasive, they now play a role in the Lake Michigan ecosystem. In the late 1960s Great Lakes states introduced big game fish such as Coho and Chinook Salmon that eat alewives, which boosted regional sport fishing.

“Historically those are the two major things you need to know – the alewife invaded, exploded to the point it was a nuisance and stunk up everything,” Janssen said. “[TIME Magazine said] the recreation industry was forever dead in Lake Michigan, then 14 or 15 months later in the same magazine there’s [a story about] this amazing new recreation industry in the Great Lakes because of the salmon.”

Now alewives serve as food for those big fish, and they’ve become an invasive species we can live with.

“For the last 10 years they’ve been managing the lakes to preserve alewife,” Henriksen said.

Alewives tend to reproduce sporadically, with a lot of babies being born in some years and almost none born in others. Janssen said a lot of alewives were born in 2010, and there’s still a lot of those fish in the lake. There may be so many alewives that the big sport fish are gorged, causing them to grow bigger but be less interested in anglers’ bait.

“That 30-pound Chinook may have been just like somebody eating Doritos while watching the Packers, just nibble, nibble, nibble and all of a sudden you’re quite big,” Janssen said. “It could be the situation that you can’t catch the fish because they’re already full, then something happens and the alewives move away for a bit and you have big fish that are hungry and you catch some.”

While alewives are valuable out in the lake, when there’s a die-off and the fish carcasses float up to shore they become a nuisance.

As long as property owners use hand tools like rakes, buckets and shovels, they don’t need a permit to clean alewives off their beaches. A general permit is required from the Department of Natural Resources for using bigger machinery like a tractor to clean up beaches.

Liberty Grove doesn’t clean alewives off town beaches. Town administrator Bud Kalms said the accumulation of fish this summer hasn’t been too bad, and nobody’s approached the town about the fish.

Whitefish Dunes State Park occasionally cleans the alewives off its beach with a large trailer with forked fingers that drag through the sand and collect anything littered on the beach.

Park naturalist Carolyn Rock said they clean up the beach to make it more welcoming to visitors, but scooping up the dead fish isn’t necessary.

“It’s fertilizer,” Rock said. “Everything that dies turns into dirt, just sometimes the way it goes about it isn’t so attractive.”